The higher members of the aliphatic carboxylic acids, from C12-C18, are known as fatty acids. They are found in nature as natural fats or esters of glycerol. Moreover, this group is the starting material for many essential organic compounds like esters, acid chlorides, anhydrides, amides etc.

Carboxyl group is a functional organic compound. In this structure of a carboxyl group, a carbon atom is attached to an oxygen atom with the help of a double bond. It also has a single bond to a hydroxyl group. Carboxylic acids are compound containing carboxyl structure. There are many members in this class of organic acids such as acetic acid and amino acid. 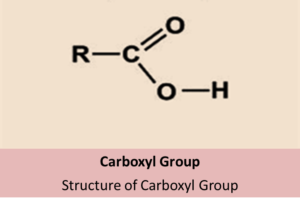 Carboxyl group is generally present on the sides of the molecules. The carboxyl group ionizes and releases the H atom present in the hydroxyl group part as a free H+ ion or a proton. However, the rest of part, this is O, convey a negative charge. The charge moves in between the two oxygen molecules forward and backward thereby making the state of ionization relatively steady. 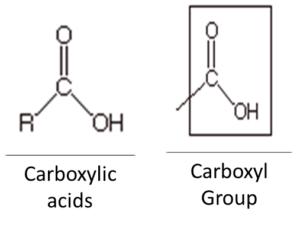 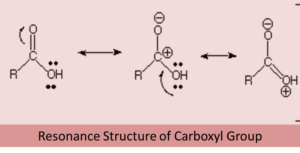 Learn more about the Structure of Carbonyl Group.

This class is among one of the earliest organic compounds that were isolated from nature. This is the reason many of the compounds of this class of compounds have common names more in use.

The origin of the common names of many members of the carboxylic acids group is from their respective Latin or Greek names of the natural sources. The common names generally end with the suffix –ic acid. For instance, HCOOH is formic acid. The origin of the name is from the Latin word “formica” which means ant. The source of formic acid is red ants.  Vinegar is the source of acetic acid (CH3COOH) and the Latin word for vinegar is “acetum.” Similarly, rancid butter is the source of butyric acid which in Latin refers to butyrum.

It is important to number the alkyl chain if more than one carboxyl group is present in a compound. You can indicate the number of carboxylic acids present in the compound by addition of the multiplicative prefix to the name of the parent alkyl chain such as dicarboxylic acid, tricarboxylic acid, and so on. Additionally, it is necessary to write the Arabic numerals prior to the multiplicative prefix to indicate the position of –COOH groups in a particular compound.

The simple members of this class of compound have names such as methanoic acid, next is ethanoic acid, propanoic acid, butanoic acid and so on. However, the nomenclature of aromatic carboxylic acids is not usually is in the standard form. In fact, they have the special IUPAC-approved special name such as benzoic acid.

We can also name the compounds on the basis of the position and alphabetical order to the subject compound. 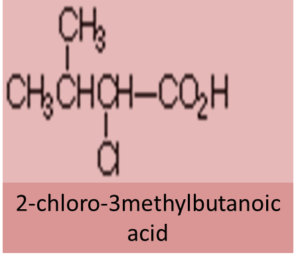 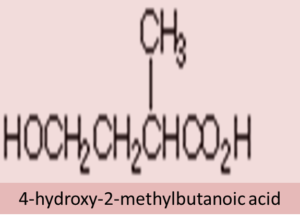 By now we know that the carboxyl carbon atom will always be the carbon-1 during the naming of a compound. Therefore, we do not require to use a locant while naming the carboxyl group.

Learn more about the Nomenclature of Carbonyl Group.

Q. Name the common name and IUPAC name of the following structures: