Toluene is a naturally occurring compound. Toluene is primarily derived from petroleum or petrochemical processes. It is a very common component in substances like gasoline, glues, and other products. Toluene is a liquid that is colourless, water-insoluble and smells similar to paint thinners. 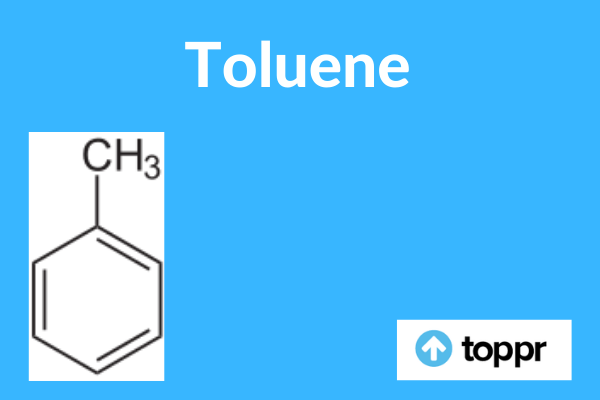 Toluene is also known as toluol. Toluene is an aromatic hydrocarbon. It is a mono-substituted benzene derivative and consists of a methyl group i.e., \(CH_3\) that is attached to a phenyl group. The systematic IUPAC name of toluene is methylbenzene. Toluene is predominantly in use as an industrial feedstock and a solvent. It is a common solvent like paints, paint thinners, silicone sealants, many chemical reactants,  rubber,  printing ink,  adhesives (glues), lacquers, leather tanners, and disinfectants. Toluene is also in use as a recreational inhalant. Toluene has the capability of causing severe neurological harm to our body.

During the year 1837, a compound was isolated through a distillation of pine oil by the Polish chemist Filip Walter. Filip Walter named it retinnaphte. While in the year1841, a French chemist with the name Henri Etienne Sainte-Claire Deville isolated a hydrocarbon from the balsam of Tolu. The compound was an aromatic extract from the tropical Colombian tree Myroxylon balsamum. He recognized that it was similar to Walter’s retinnaphte and benzene.

Therefore, he called the new hydrocarbon benzoene. In 1843, Jöns Jacob Berzelius suggested the name toluin for the same compound. The French chemist Auguste Cahors isolated a compound from a distillate of wood a hydrocarbon that he recognized as similar to Deville’s benzene. Thus, Cahors named the isolated compound toluene in 1850.

6) Toluene reacts as an aromatic hydrocarbon in an electrophilic aromatic substitution reaction. Because the methyl group has greater electron-releasing properties than a hydrogen atom in the same position.

7) Toluene is more reactive than benzene toward electrophiles.

8) Toluene undergoes sulfonation and as a result, it gives p-toluene sulfonic acid, and chlorination by \(Cl_2\) in the presence of \(FeCl_3\) to provide ortho and para isomers of chlorotoluene.

9) Though, the methyl side chain in toluene is susceptible to oxidation. Toluene reacts with Potassium permanganate to yield benzoic acid, and with chromyl chloride to yield benzaldehyde alike Etard reaction.

10) The methyl group in toluene undergoes halogenation under free-radical conditions. For instance, N-bromosuccinimide i.e., NBS is heated with toluene in the presence of AIBN that gives benzyl bromide. The same conversion can be affected by elemental bromine in the presence of Ultra-violet light or even sunlight. Toluene can easily be brominated by treating it with HBr and H2O2 in the presence of light.

11) The methyl group in toluene undergoes deprotonation only if it is with very strong bases. Its \(pK_a\) is estimated to approximately be 41. Complete hydrogenation of toluene gives methylcyclohexane. This reaction requires a high pressure of hydrogen and also a catalyst.

Toluene occurs naturally in crude oil at low levels. It is a by-product in the production of gasoline by a catalytic reformer or ethylene cracker. Toluene is also a by-product of the production of coke from coal. The final separation and purification are done by the distillation or solvent extraction processes that are in use for BTX aromatics like benzene, toluene, and xylene isomers.

Toluene is inexpensively made industrially. Toluene can be prepared by a variety of methods. For instance, although only of didactical interest, benzene reacts with methyl chloride in presence of a Lewis acid such as aluminium chloride to give toluene:

These reactions are complicated by polymethylation process because toluene is more susceptible to alkylation than is benzene.

The precursor to benzene and xylene

Toluene is primarily in use as a precursor to benzene via hydrodealkylation:

The other application involves its disproportionation to a mixture of benzene and xylene.

Benzoic acid and benzaldehyde are manufactured commercially by partial oxidation of toluene with oxygen. The catalysts include cobalt or manganese naphthenates.

Toluene is in use as an octane booster in gasoline fuels for internal combustion engines as well as jet fuel. Toluene at 86 per cent by volume fuelled all the turbocharged engines in Formula One during the 1980s. It was first pioneered by the Honda team. The rest 14 per cent was a fille of n-heptane. It is to reduce the octane to meet Formula One fuel restrictions.

Toluene at 100 per cent is in use as a fuel for both two-stroke and four-stroke engines. Due to the density of the fuel and other factors, the fuel does not vaporize easily unless it is preheated to \(70^oC\) or \(158^oF\). Honda solved this problem cars by routing the fuel lines through a heat exchanger in their Formula One. It was done by drawing energy from the water in the cooling system to heat the fuel.

In Australia, toluene was found to have been illegally mixed with petrol in fuel outlets for sale as it was meant as a standard vehicular fuel. Toluene incurs no fuel excise tax, though other fuels are taxed at more than 40percent. It provides a greater profit margin for fuel suppliers.

Question 2:  What functional group is toluene?
Answer: Toluene is the simplest toluene member of the class consisting of a benzene core with a single methyl substituent. It is a part of toluenes and methylbenzene that is a volatile organic compound.

Question 3: What does toluene smell like?
Answer: Toluene is an aromatic hydrocarbon derivative of methyl-substituted benzene. It exists as a transparent, colourless volatile liquid and has a pungent, benzene like odour.