We generally associate sugar with glucose. But did you know the table sugar we use every day is not glucose? It is, in fact, a disaccharide known as sucrose. Let us have a detailed look at disaccharides and their structures and properties.

Cyclic monosaccharides react with alcohols to form acetals and ketals. Sometimes this alcohol is actually a carbohydrate since they function very similarly to alcohols. So when this happens individual monosaccharides link together to make an acetal. This linkage is known as glycosidic linkage.

This linkage is an oxide linkage formed by the loss of a water molecule. When two monosaccharides are linked together by glycosidic linkage the resulting product is a disaccharide. Now let us take a look at some common and important disaccharides. 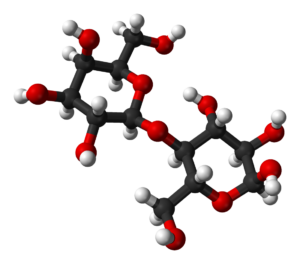 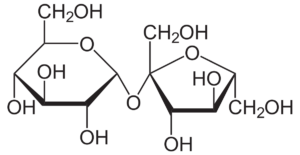 This is the most important disaccharide. It is popularly known as table sugar. Sucrose is found in all photosynthetic plants. It is commercially obtained from sugarcane and sugar beets via an industrial process. Let us take a look at some chemical properties of sucrose

Did you know, Carbohydrates are the sources of Food, Shelter and Clothing? Learn more about the importance of  Carbohydrates here. 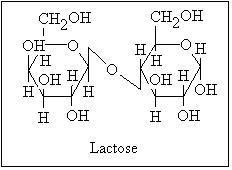 This is a disaccharide you may already be familiar with. Lactose is the primary ingredient found in the milk of all mammals. Unlike the majority of saccharides, lactose is not sweet to taste. Lactose consists of one galactose carbohydrate and one glucose carbohydrate. These are bound together by a 1-4 glycosidic bond in a beta orientation.

If you look at the structure of lactose you will see that there is one significant difference between galactose and glucose. Galactose’s fourth carbon has a different orientation in galactose than in sucrose. If it was not so the resulting molecule would have just been sucrose (glucose+glucose) instead of lactose.

Also from the structure, we can notice that lactose is a reacting sugar since it has one free hemiacetal hydroxide. So when we react Lactose with bromine water it will give monocarboxylic acid.

Learn about Polysaccharide here with videos and solved examples. 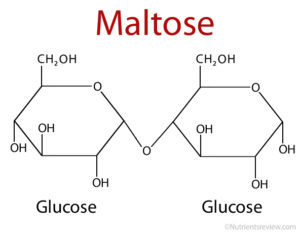 Maltose is another disaccharide commonly found. It has two monosaccharide glucose molecules bound together, The link is between the first carbon atom of glucose and the fourth carbon of another glucose molecule. This, as you know, is the one-four glycosidic linkage. Let us look at a few of its properties

Q: Sucrose is a non-reducing sugar due to

Sol: The correct answer is option “a”. Due to the 1-2 linkage in sucrose both aldehyde group of glucose and keto group of fructose is not free. Hence the sugar becomes non-reacting.