Did you know, other than water, protein is the most abundant substance in your body? In fact, every single cell of the human body consists of proteins. Proteins have a unique three-dimensional structure, which allows it to perform its various functions. We shall now study the structure of proteins. 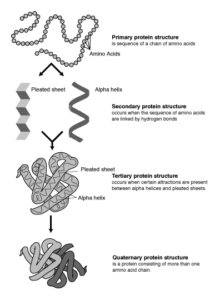 Proteins are what we call biological polymers (i.e. they occur naturally in nature). Now we previously learnt that amino acids are the building blocks of proteins. What this actually entails is that proteins are long chain-like structure, with amino acids being the main ingredient.  These amino acids are connected together with peptide bonds, and a few such bonds linking together form a polypeptide chain. Now one or more of these polypeptide chains twist or fold spontaneously and a protein is formed.

The size of the proteins varies greatly. It actually depends on the number of polypeptide molecules it contains. One of the smallest protein molecules is insulin, and the largest being Titin which consist of 34,350 amino acids.  Let us now look at the four types of protein structure that make up a protein molecule.

The primary structure is the unique formation and order in which the amino acids (the building blocks) combine and link to give us a protein molecule. Protein gets all its properties from its primary structure.

There are in all twenty amino acids in the human body. All of these have a carboxyl group and an amino group. But each has a different variable group known as the “R” group. It is this R group that lends a particular protein its unique structure.

Every protein is determined by the sequencing of the amino acids. The formation and ordering of these amino acids in proteins are extremely specific. If we alter even one amino acid in the chain it results in a non-functioning protein or what we call a gene mutation.

After the sequencing of amino acids, we now move on to the secondary structure. This is when the peptide backbone of the protein structure will fold onto itself, to give proteins their unique shape. This folding of the polypeptide chains happens due to the interaction between the carboxyl groups along with the amine groups of the peptide chains.

There are two kinds of shapes formed in the secondary structure. These are

This is the structure that gives protein the 3-D shape and formation. After the amino acids form bonds (secondary structure) and shapes like helices and sheets, the structure can coil or fold at random. This is what we call the tertiary structure of proteins. If this structure is disrupted or disturbed a protein is said to be denatured which means it is chemically affected and its structure is distorted.

Q: The destruction of the biological nature and activity of proteins by heat or chemical agent is

Sol: The correct answer is option “C”. Denaturation of proteins is the disruption and even possibly the destruction of both secondary and also tertiary structures of proteins.