Calcium carbonate is an active ingredient in the agricultural lime which forms when calcium ions react with the carbonate ions in hard water to form as limescale. It is medically applicable as a calcium supplement or an antacid, but over-consumption can be dangerous and could lead to poor digestion. 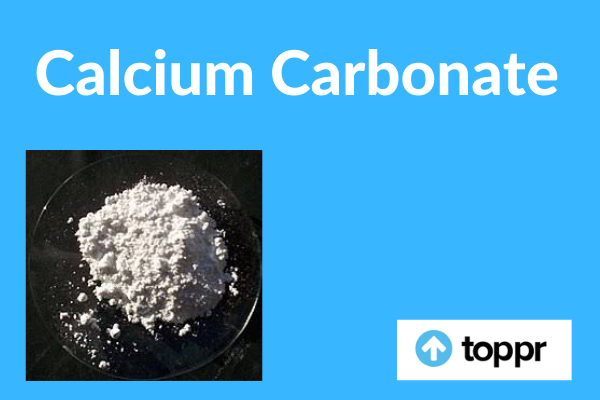 What is Calcium Carbonate?

It can also be present in many other kinds, such as marbles, limestone, etc. Though they are available in different forms, they are chemically identical and differ only physically. Calcium carbonate is a known non-toxic and odourless compound widely found as a white mineral that naturally occurs in limestones, chalks, marbles and pearls.

When the carbon dioxide pass in bulk, it contributes to the production of calcium hydrogen carbonate.

Commercial manufacturing of calcium carbonate (CaCO3) is of two kinds. Both classes perform industrially on the basis of the particle size and the characteristics of the product.

Ground Calcium Carbonate: It is produced by the extraction and processing of naturally occurring deposits. The shape of the GCC crystal is irregularly rhombohedral, and its distribution is broader in size.

Precipitated Calcium Carbonate: It is produced by the chemical precipitation process with the help of a carbocation process or a bulk chemical processes by-product. The structure of the PCC crystal is dependent on the product, and the particles are more regular and uniform with a narrow distribution size.

PCC has smaller particles of greater purity and is less abrasive and tends to have a higher brightness than GCC.

The thermodynamically stable structure of CaCO3 is hexagonal \(\beta-CaCO_3\)(the mineral calcite) under normal conditions. Other forms are possible to be made, the denser \(2.83 g/cm^3\) orthorhombic \(\lambda-CaCO_3\) (mineral aragonite) and, hexagonal \(\mu-CaCO_3\), which occur as mineral vaterite. Like, preparation of aragonite form at temperatures above 85°C and preparation of vaterite at 60°C is possible. Calcite contains calcium atoms coordinated with six oxygen atoms, and nine oxygen atoms co-ordinated in aragonite. The composition of the vaterite is not well known.

The occurrence of Calcium Carbonate

Biological Sources: Eggshells, snail shells and most seashells are primarily calcium carbonate, which is also a commercial source of this chemical. Recently oyster shells have been recognised as a source of dietary calcium which, are also a practical industrial source. Dark green vegetables, including broccoli and kale, contain large quantities of calcium carbonate on a diet but are not functional as an industrial source.

Q.1. What is the use of calcium carbonate?

Answer. It is medically applicable as a calcium supplement or an antacid to treat stomach upset, heartburn, and acid indigestion. But over-consumption can be dangerous and could lead to poor digestion.

Q.3. Is limestone a calcium carbonate?

Q.4. How should one take a calcium carbonate medicine?

Answer. Calcium Carbonate comes as a pill, a chewable tablet, a capsule, and a liquid to drink. One should take the medication three to four times a day. Follow the instructions on your medication or product label closely and ask your doctor or pharmacist to clarify any part you don’t understand. Take your calcium carbonate exactly as instructed.

Q.5. What are the chemical formula and molar mass of calcium carbonate?

Answer. The chemical formula of calcium carbonate is CaCO3. And its molar mass is 100.0869 g/mol.