Cyanide is a chemical substance that comprises the \({C \equiv N}\) group. This group, the cyano group, constitutes a carbon atom which is triple-bonded to a nitrogen atom. It is also known as Cyanide anion or nitrile anion cyanide ion. Some fungi, algae, and bacteria can produce cyanide. It is also present in exhaust engines, spinach, tapioca, almonds, etc. At room temperature, hydrogen cyanide acts as a colourless or light blue liquid, while at a higher temperature, it is a colourless gas and smells like bitter almonds.

Some cyanide, such as potassium cyanide and sodium cyanide, occurs in white powder form and smells like bitter almonds. Cyanide-containing compounds and cyanide are useful in plastics, pharmaceutical and dyeing companies, photo-developing companies, etc. Some industrial processes, such as wastewater treatment, steel manufacturing, etc., can also produce cyanide. 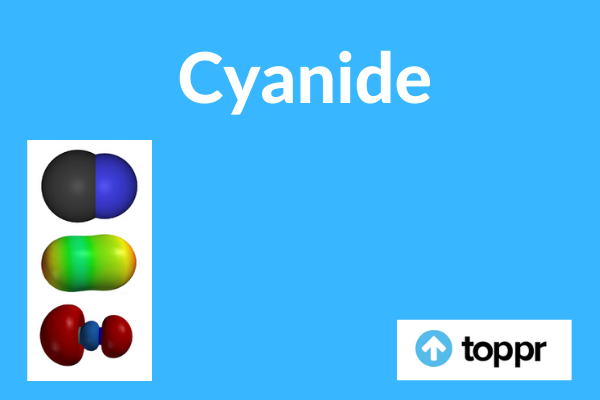 The cyanide group found in inorganic cyanides as the \({CN^-}\) anion. Salts like sodium cyanide and potassium cyanide are highly poisonous. Hydrocyanic acid, also known as HCN or hydrogen cyanide, it is a highly volatile liquid manufactured industrially on a large scale. The acidification of cyanide salts produces the hydrocyanic cyanide.

Organic cyanides are generally known as nitriles. In nitriles, the CN group is bound to carbon by a covalent bond. For example, in acetonitrile, the cyanide group is bound to methyl (CH3). Since cyanide ions are not released, nitriles are usually less toxic than cyanide salts. Many nitriles, which naturally occur as cyanohydrins, produce hydrogen cyanide.

Cyanide is essentially a white colour substance that occurs in the form of crystals or powders. When found in its aqueous state, it smells much like sour almonds. The chemical formula of cyanide is  \({CN^−}\) and the chemical formula of hydrogen cyanide is HCN. The molecular weight of hydrogen cyanide is 27.0253 g/mol and, its density is \(0.6876 {g/cm^3}\). It has a melting point of -13.4 °C and, the boiling point of 25.6 °C.

Some fungi, bacteria, and algae can produce cyanide. It is also present in various other plants. Cyanides are present in considerable numbers in some seeds and fruit stones, e.g. bitter almonds, apricots, apples and peaches. Chemical compounds that can produce cyanide are cyanogen compounds. In plants, cyanides are usually attached to sugar molecules in the cyanogen glycosides and shield the plant from herbivores.

Madagascar Bamboo Cathariostachys madagascariensis produces cyanide as a disincentive to grazing. In response, the golden bamboo lemur, which feeds on bamboo, has developed a high resistance to cyanide.

The combustion or pyrolysis of some material under oxygen-deficient conditions forms hydrogen cyanide. For example, in the exhaust of internal combustion engines and tobacco smoke. Some plastics, particularly those extracted from acrylonitrile, produce hydrogen cyanide when heated or burnt.

Because of the cyanide anions high nucleophilicity, the cyano group can readily be introduced into organic molecules by the displacement of a halide group (e.g., the chloride on methyl chloride). Natural cyanides are commonly known to as nitriles. Thus, CH3CN can be called methyl cyanide but is generally known as acetonitrile. In organic synthesis, cyanide is a known C-1 synthon as it is useful to lengthen the carbon chain by one while preserving the ability to function.

The principal method for manufacturing the cyanide is the Andrussow process in which gaseous hydrogen cyanide emits from methane and ammonia in the presence of oxygen and a platinum catalyst.

Some cyanides are highly poisonous. Cyanide anion is an inhibitor of the enzyme cytochrome c oxidase, the fourth complex of the electron transport chain located in the inner membrane of eukaryotic mitochondria. Within this protein, it binds to the iron. Cyanide binding to this enzyme inhibits the transport of electrons from cytochrome c to oxygen. As a response, the electron transport chain is broken, which means that the cell can no longer aerobically generate ATP for energy. Tissues that strongly dependent on aerobic respiration, such as the central nervous system and the heart, are mainly affected. It’s an example of histotoxic hypoxia.

Hydroxocobalamin interacts with cyanide to form cyanocobalamin, and thus the kidneys can safely remove them. This approach has the benefit of preventing methemoglobin formation. This antidote package is sold under the brand name Cyanokit and licenced by the U.S. FDA in 2006.

The aim of the antidote was to produce a large pool of ferric iron (Fe3+) to compete with cytochrome a3 for cyanide (so that cyanide will bind to it rather than the enzyme). Nitrites oxidise haemoglobin to methemoglobin that competes with cytochrome oxidase for the cyanide ion.

The mechanism important for eliminating cyanide from the body is the enzymatic conversion of the mitochondrial enzyme rhodanese to thiocyanate. Thiocyanate is a comparatively non-toxic molecule that excretes from the kidneys. In order to accelerate this detoxification, sodium thiosulfate administration is necessary to supply the Rhodanese sulphur donor required to generate thiocyanate.

Q.1. What does cyanide do to the human body?

Q.2. Why is cyanide negatively charged?

Answer. In the case of the cyanide ion, the carbon creates a complete negative charge as well as a lone pair of electrons. The nitrogen atom also consists of a lone-pair, although this does not avoid ambiguity. The mixture of the lone-pair with a negative charge makes the ion’s carbon end the nucleophile.

Q.3. What is the cyanide ions formula?