A covalent bond is a chemical bond in which pairs of electrons are shared between two atoms. The covalent bond is also called a molecular bond. The forces of attraction or repulsion between two atoms, when they share electron pair or bonding pair, is called as Covalent Bonding. Carbon, having four electrons in its outer shell has given it the ability to form innumerable molecules and bonds. This is why carbon has so many elements and allotropes. Confused as to why? It is because a carbon atom is in the most favourable situation to form a covalent bond. Let us learn further.

What is a Covalent Bond?

Covalent bonding occurs between non-metal elements when pairs of electrons are shared by atoms. Atoms will covalently bond with other atoms to attain the nearest noble gas electron configuration. Here when elements share their electrons, they do not become positive or negative, since they are neither gaining nor sacrificing electrons. Thus no ions are formed by covalent bonding. Based on the number of shared electron pairs, there are three types of covalent bond. Namely, single covalent bond, double covalent bond and triple covalent bond.

Let us learn about covalent bonding through examples given below

The simplest way to learn about the covalent bond is the example of a hydrogen molecule. Are you aware that hydrogen that is present in our atmosphere cannot exist in its original form? It has to bond with another atom, for it to be stable enough. This is why the molecular formula of hydrogen is always H2.

A single atom of Hydrogen has one electron, i.e. its atomic number 1. It has its only electron in its first and only orbit. Now to be a stable molecule it needs to complete its duplet state. So a single hydrogen atom will remain unstable until it attains one more electron. So we can say the valency of hydrogen is 1. The valency of an atom depends on its sharing capacity. So the hydrogen atom shares its single atom with another hydrogen atom. Now both hydrogen atoms have two (shared) electrons in its outer shell and it is a stable molecule H2. This bond formed by sharing electrons is nothing but a covalent bond.

As you are aware the reactivity of elements is its ability to lose or gain electrons so that its outermost shell has a complete octet (or duplet in case of hydrogen) in order to attain noble gas electron configuration. However, carbon has a unique situation. It has four electrons in its outermost shell, so one of the following situations must happen.

So instead, carbon comes up with a unique solution. It shares its valence electrons with those of other carbon atoms, or even atoms of other elements. Now these shared atoms of the last shell, belong to both the atoms, hence forming a bond between these atoms. Now both atoms have a complete outer shell with eight atoms and have both attained noble gas electron configuration. This sharing of atoms, instead of gaining or losing is called covalent bonding. And Carbon, since its atomic number is 6, and it has four electrons in the last shell has the most favourable structure for covalent bonding. 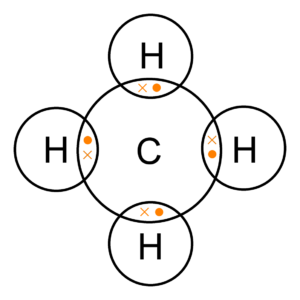 Methane: Now let us take a look at covalent bonding in some carbon elements. Let’s get started with that of Methane. Its chemical formula is CH4. Now that means one atom of carbon combines with four atoms of Hydrogen to make one molecule of methane. All the hydrogen atoms have only one electron in their outermost shell and carbon has four. So carbon shares each of its four electrons with one atom of carbon. This way carbon now has a complete octet and all four hydrogen atoms have a complete duplet.

Carbon dioxide: Let us take a look at another element you should be very familiar with, carbon dioxide. Here two atoms of oxygen combine with one atom of carbon thus giving us the molecule CO2. As we already know that carbon has four electrons in its outer shell, whereas oxygen with atomic number 8, has six atoms in the last shell. So carbon shares two of its atoms with each atom of oxygen. This way all three atoms complete their octet giving us one stable molecule.

Q: Which one of the following compound contains ionic, covalent and coordinate bonds?