This organic compound is available in many vegetables and plants. It is the simplest dicarboxylic acid, but its acidic strength is greater than the acetic acid. Its excess consumption is dangerous for health. It is produced by the oxidation of the carbohydrates. Artificially, it can be prepared in the laboratory by the oxidation of sucrose in the presence of nitric acid. This production needs the catalyst vanadium pentoxide. This article will explain the concept of Oxalic acid

Its general structure is having two polymorphs and due to this, it appears as a white crystalline solid. After dissolving into water, it becomes a colourless solution. It is popularly useful as the reducing agent. It works as the chelating agent with oxalate as its conjugate base.

It’s one compound calcium oxalate is the common constituent of kidney stones. Members of the family of spinach and brassicas like cabbage, broccoli, and Brussels sprouts are rich in such oxalates. The human body can also produce it by the metabolism of glyoxylic acid or ascorbic acid. . 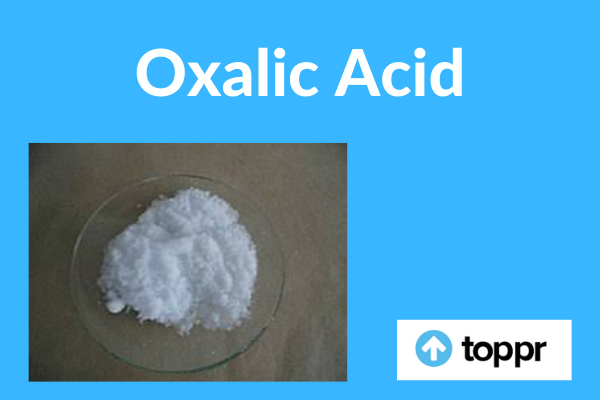 Oxalic Acid is a dicarboxylic acid. Its molecular \(C_{2}H_{2}O{4}\).  Its condensed formula is HOOC-COOH. It is also popular as Ethanedioic acid or Oxiric acid. It appears as a white crystalline solid which forms the colourless solution in water. Its condensed formula shows its classification as the simplest dicarboxylic acid. It is more acidic than that of acetic acid. This acid occurs in the cell sap of Oxalis and Rumex species of the plants as the potassium and calcium salt.

This acid is one of the most powerful of the organic acids and expels carbonic acid and many other acids from their salts. It is produced by the action of either hydrate of potash or of nitric acid upon the many organic compounds of natural occurrence. It is also termed as diprotic acid.

One may prepare Oxalic Acid in the laboratory easily by oxidation of certain carbohydrates such as sucrose by the concentrates nitric acid. During this oxidation process, the carbon atoms are split off in pairs for giving the oxalic acid.

Procedure for its preparation is as follows. Take 10 gm of cane sugar in a conical flask. Then add 50 ml of concentrated nitric acid and heat on a boiling water bath. Then remove the flask and keep on the wooden surface. After 15 minutes pour the hot solution in the evaporating dish, washing the flask with 10ml of concentrated nitric acid and adding to the evaporating dish.

Let it evaporate the acid solution by heating through the boiling water bath. This will be done till the residual solution of 10ml. Cool the solution in the ice water mixture to get its crystals. Collect the product on the Buchner funnel at the pump, further dry the product by pressing between the filter paper and then in the air. The product will be about 3.5gm of oxalic acid.

Its condensed formula is COOH-COOH, which shows that oxalic acid is the dibasic acid in nature. So, it may donate two H+ ions. Therefore, the equivalent weight of oxalic acid:

The valence factor is 2 in the case of oxalic acid. It easily reacts as the typical carboxylic acid, to produce the acid chloride and ester derivatives. Oxalic acid is very toxic and hence harmful. If it is inhaled, then it can severely damage the mucous membranes as well as the respiratory tract. Further, it shows the symptoms like cough, wheezing, laryngitis, and shortness of breath. Its contact with skin or eyes may cause severe irritation, burns and tissue damage. It is also toxic while being swallowed and it hence may lead to kidney failure.

Uses of the Oxalic Acid

Q.1: Oxalic acid belongs to a polar or nonpolar category?

Answer: Two carboxylic acid groups are composing one molecule of oxalic acid (i.e. HOOC-COOH). These groups are polar because these are able to form hydrogen bonds with molecules of water. Therefore, Oxalic acid is ideal water-soluble. Actually, it is polar and hence it is soluble in all polar solvents.

Q.2: Is it safe to consume honey treated with oxalic acid?

Q.3: How one can flush oxalates out of the body?

Answer: It is possible, by increasing the amount of calcium in the diet. A diet rich in calcium intake will help to reduce the amount of oxalate being absorbed by the human body. And as a result, stones are less likely to form.

Q.4: Can we say that Oxalic acid is a strong acid or not?

Answer: As an organic acid, this acid is a weak acid. It is known to be soft acid. It is weaker than the  H_{3}O^{+}  atom. Whereas, it is better than acetic acid, sulphuric acid, nitrous acid, benzoic acid, and so on.

Q.5: What are some Health hazards of Oxalic acid?

Answer: Oxalic acid is having strong poisonous property. Its toxic symptoms due to its ingestion are like vomiting, diarrhoea, and much gastrointestinal disorder. Not only this, some other hazards are like renal damage, shock, convulsions, and even coma. Death may also be possible due to cardiovascular collapse. Oxalic acid is very irritating for the eyes, mucous membranes, and skin. Inhalation or ingestion may result in kidney damage. The toxicity arises as it reacts with the calcium in the tissues present in the human body to form calcium oxalate, and as a result, it is upsetting the calcium potassium ratio.