Graphite is derived from a Greek word called graphene which means writing so it’s because graphite was primarily used initially for making pencils that’s how it got its name. is an aloe trope of carbon which is greyish in colour and opaque. It’s extracted from the ground, however, takes years to be formed.

In China which has the highest source of graphite in the meantime. Graphite is a non-metal because it is made up of carbon atoms. However, one of its property that makes it behave like a metal. It is the most stable form of carbon Because graphite is favoured by high pressure and high temperature. At these standard conditions hey diamond will be tending to convert to graphite.

However the process takes millions of year, so at these normal standard conditions, graphite is a much stable form of carbon then diamond. Yeah. If it burns in air carbon dioxide gas formed. The aqueous solution of graphite is known as Aqua dog first stop graphite is also known as plumbago. 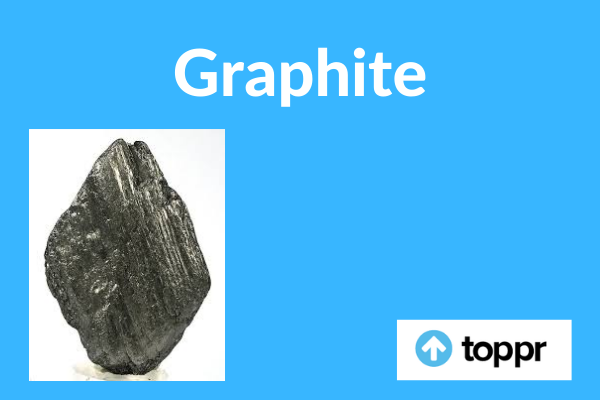 Graphite is formed when carbon is subjected to the intense heat and pressure of the earth crust and upper mantle. Today graphite is often associated with the pencil. The lead filling is a mixture of graphite and clay. It is also a common ingredient in the lubricant. Graphite has the same chemical composition as a diamond, which is also a pure carbon. It is the different molecular structure that gives each they are almost opposite characteristics. Key world producing countries include China, India Brazil, North Korea and Canada.

Graphite is an allotrope of carbon. graphite each carbon Atom is linked with 3 other carbon atoms by single covalent bond resulting in the hexagonal ring which is arranged in a layer. In general, graphite is used in pencil laid, batteries as an electrode. It has 2-dimensional layers like structure. It is also called a sandwich-like structure. In the structure of graphite, each carbon Atom is SP to hybridised and hexagon are arranged in layers. In the layer, each carbon atom is linked to 3 other carbon atoms in the same plane through covalent bonds. The 4th valence of carbon Atom is satisfied by week wonder walls forces between 2 layers. The C-C bond length is 0.142 nm within the layer and C-C distance between 2 layers is 0.34 nm. Graphite is used for making metallurgical crucible.

Graphite is an allotrope of carbon which is used for making moderator rods in nuclear power plants. Its properties are as follows:

Generally, there are 2 types of graphite one is Alpha graphite and the second is beta graphite. These are classified as the arrangement of the carbon atoms.

Process of making Graphite in a Lab

Graphite is a brittle steel black coloured compound that is used in several different industrial inductor processes as well as in the lady for your pencil. To make graphite in the lab we need the flowing material  1) 10- 15 gram of sucrose, 2) 10 mils of 18 molars sulphuric acid, 3) 10- 20 grams of sodium bicarbonate, 4) 250 mil beaker, 5) a stirring rod, 6) 10 ml graduated cylinder and a plastic zip-lock bag. Now firstly placed 10 millilitres of 18 molar sulphuric acids in a 10 millilitre graduated cylinder. Place 15 grams of sucrose in a 50-millilitre beaker. Now pour the 10 mils of punch chisel, Cassatt, into sucrose. Stir it briskly. You will notice the reaction is taking place as the materials get darker and eventually turned black. After some time the reaction completes and the result is the graphite.

Q.1. Why graphite is in use as a lubricant?

Answer – Graphite is in use as a lubricant because each layer of graphite can slide over others due to weak Vander wall forces. Hence it shows lubricant property and used as solid lubricants.

Q.2. What do you mean by graphene?

Answer – It is an allotrope of carbon, the single layer of graphite discovered in 2003. It has a honeycomb-like structure. Graphene is not only one of the thinnest but also the strongest materials. It conducts heat better than all other materials. It is a great conductor of electricity, it is optically transparent. These amazing properties and its multifunction functionality make graphene suitable for a wide spectrum of applications ranging from electron ices to optics sensors and biodevices.

Q.3. Why is graphite able to conduct electricity while diamond not?

Q.4. What are the main chemical properties of graphite?

Answer – It has high melting and boiling point because the bonding between 2 carbon Atom in graphite is covalent and we know that covalent bond is the stronger bond.