Sodium Chloride, with the molecular formula NaCl, is an ionic compound. Sodium Chloride is known as salt as well. It occurs in coastal waters and oceans. It is also present in the form of rock salt. NaCl is consist of approximately 1 per cent to 5 per cent seawater. It is a white crystalline solid. The Sodium Chloride molecular weight is 58.44g/mol. 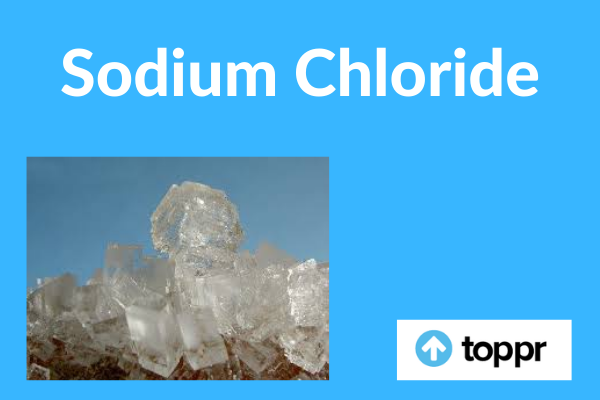 China is the largest salt provider in the country. Global production was estimated at 280 million tonnes in 2017, with China (68.0), the United States (43.0), India (26.0), Germany (13.0), and Canada are the top five producers (in millions of tonnes) (13.0). Salt is also a by-product of the extraction of potassium, but it forms readily through the mixture of sodium and chlorine components.

In a combustive reaction that releases about 411 kilojoules of energy per mole of the compound, because of the violence of such a reaction. Sodium chloride solutions are often formed by the neutralization of the strong base sodium hydroxide and the strong acid hydrochloric acid, reversing the energy-absorbing electrolysis mechanism that allows both sodium hydroxide and hydrochloric acid more expensive than sodium chloride and allows water to evaporate from the solution, which is not feasible.

Similarly, after a reaction between a metallic chloride (most are soluble) and such a salt as sodium carbonate (one of the few water-soluble carbonates) as an insoluble carbonate, it is formed from several reactions involving solutes that make sodium chloride as the remaining solution.

Consequently, the addition of ferrous chloride to calcium carbonate or sodium carbonate solution results in the precipitation of ferrous carbonate from the remaining sodium chloride in the solution. Sodium chloride is so affordable that it never has to synthesize. By pouring water into underground salt fields, most of the artificial brines are collected. In industrial countries, a large volume of brine itself is directly in use.

While there are various advantages to the application of sodium chloride (i.e., driving safety), The excess of anthropogenic loading in the winter storms and reducing the financial impacts of winter storms. There are also harmful impacts on the climate. Studies have shown that around 955 in urbanized countries. The de-icing of chloride inputs into a watershed is from the road and parking lot. By modifying the soil and water quality and thereby affecting the biota and vegetation it sustains, these excessive amounts of sodium chloride in the atmosphere will cause problems on habitats.

Road salt ends up in fresh-water sources and by compromising its osmoregulation capacity, it could damage aquatic plants and animals. In any coastal coating application, the omnipresence of salt presents a challenge, as salts which is trap create great adhesion issues. Naval authorities and shipbuilders track during building the salt concentrations on surfaces.

Measured as sodium chloride, the IMO control is often useful and sets salt levels to a limit of 50 mg/m2 soluble salts. Using a Bresle test, these calculations are complete. Throughout North America and European freshwaters, salinization (increasing salinity, aka freshwater salinization syndrome) and the resulting increase in metal leaching is a continuous concern.

While evidence of ambient salt loading is observed at peak use, the sodium concentrations in the region where salt was applied were reduced greatly by spring rains and thaws. It is also important to consider how a particular soil deals with NaCl concentrations.

Q.1 What are the properties of sodium chloride?

Answer. The properties are:

Q.2 How is Sodium Chloride useful in medicine?

Answer. Mixed with water, sodium chloride produces a salt solution that has a variety of various medicinal applications. Medical uses of the salt solution include:

Q.3. In which process do Sodium chloride produce sodium carbonate and calcium chloride?

Answer. In the Solvay process, sodium chloride is useful to produce sodium carbonate and calcium chloride.