Ethyne or Narcylen or Vinylene are also referred to as acetylene. As a chemical building block and as a fuel, it is commonly in use. It is an unsaturated compound with a double bond linking the two carbon atoms in it. As an alkyne, since the two carbon atoms are bound together in a triple bond, acetylene is unsaturated. All four atoms are position in the same straight line by the carbon-carbon triple bond, with CCH bond angles of 180°.

It typically contains traces of phosphine that create an unpleasant garlic-like odour, as made from calcium carbide. Through the release of fire, acetylene can be decomposed into its components. Depending on the circumstances, the decomposition may or may not give rise to the blast. Under pressure exceedingly around 15 pounds per square inch, whether in liquid or solid form, pure acetylene bursts with intense intensity. 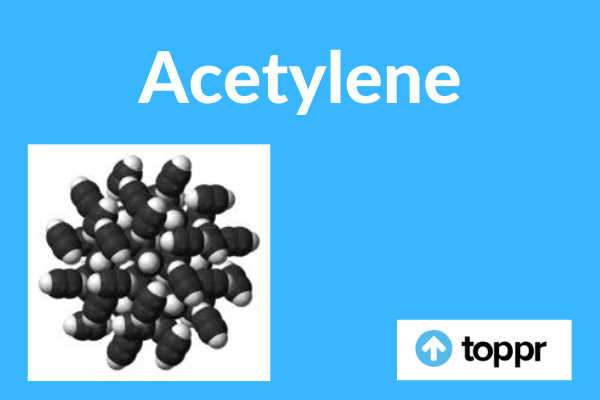 Acetylene has largely been producing by the partial combustion of methane since the 1950s. It is a recovery side product of hydrocarbon cracking in the processing of ethylene. In 1983, this process produces nearly 400,000 tons. Due to its explosive character and its potential to poison Ziegler-Natta catalysts, its existence in ethylene is typically undesirable. It is prepared by calcium carbide hydrolysis, a reaction which Friedrich Wohler discovered in 1862.

Production of calcium carbide requires exceptionally high temperatures, ~2000 °C, requiring the use of an electric arc furnace. This method was an important part of the chemical revolution of the late 19th century in the US, made possible by the huge hydroelectric power plant at Niagara Falls.

From the Calcium Carbide, in 150 ml, put some small lumps of calcium carbide (about 15 g). A distilling-flask (or equivalent capability in a Buchner flask) and a tall dropping-funnel fit into the neck of the flask, the stem of which has been cut off to a fine point: the stem can pass just below the sidearm of the flask. Link this sidearm to a 10 per cent aqueous copper sulphate solution wash-bottle. Then fit a distribution tube into the wash-bottle that moves precisely through a pneumatic trough. Fill the falling funnel with water and cause the latter to fall drop by drop to the calcium carbide: acetylene is produced at once and releases from hydrogen sulphide while passing through the copper sulphate solution.

Enable the gas in the pneumatic trough to exit from the distribution tube before the releasing gas smells strongly like acetylene. Then, just as define for ethylene, obtain a sample of the gas in a tiny test tube. Ignite the sample on a burner mount at a reasonable distance from the apparatus as before. The acetylene, though, is air-free and can fire softly with a very smoky flame that deposits carbon in the tube.

Acetylene is often useful because the object is too large to fit into a furnace for the carburization (that is, hardening) of steel.

Acetylene inhalation can result in dizziness, headache, and nausea. It can also contain harmful impurities: a rating scheme for the detection and quantification of phosphine, arsine, and hydrogen sulphide content in industrial grades of acetylene has been set up by the Compressed Gas Association Commodity Standard for acetylene to restrict exposure to these impurities. The carryovers of the synthesis element coke are sulphur, phosphorus, and arsenic, an impure form of carbon and other organic impurities from the thermal cracking of the source of hydrocarbons.

Acetylene, according to the literature, was rarely abused in a way akin to the misuse of nitrous oxide in modern days. Such abuse may result in the abuser’s death due to the toxicity of phosphine, arsine, and hydrogen sulphide impurities mention above. As the gas is loaded (absorbed) into tanks over a solid matrix saturated with acetone, any acetone falls out with the gas. It is easy to detect impurities in acetylene by scent. Pure acetylene is a gas that is colourless and odourless. Professional grade acetylene’s distinctive garlic-like odour is due to oxidation through impurities.

Divinyl sulphide, mercury, oxygen, arsenic, phosphine, arsine, methane, carbon dioxide, carbon monoxide, hydrogen sulphide, vinyl acetylene, Impurities may be present in them. After numerous chemical blasts inside the lungs of patients, the use of acetylene and oxygen mixtures was discontinued. Owing to the volatility of the triple bond, the energy of such blasts will be likely to surpass all of the flammable inhalation anaesthetics. Air mixtures containing between 3% and 82% acetylene are inflammable explosives. 335 °C is the minimum ignition temperature. The bulk of the chemical energy of acetylene is what is not found in the triple carbon-carbon bond; that is, it is larger than that distributed out by three carbon-carbon bonds but is forbidden because of the spaces between its mate carbon and all other carbon atoms.

Q.1 Why is ethyne called acetylene?

Ans. The French chemist Marcelin-Pierre-Eugène Berthelot (1823-1907) coined the name in 1864, from the French acetylene. This was drawn from the chemical ending ene + acetyl, which, in 1839, was thought up by the German chemist Justus von Liebig.

Q.2 Write the properties of acetylene?

Ans. The properties of acetylene are:

Q.3 is acetylene corrosive to metal?

Ans. In its pure form, acetylene is colourless and has a strong fragrance. Although acetylene has many properties, it is able to prevent top-line corrosion that typically happens in gas pipelines. We may, due to its high volatility, spray it as a corrosion inhibitor.