You often hear people debating over the difference between petrol and diesel engine. When we talk about in technical terms, we will see that the key difference is that the petrol engine functions on the Otto cycle. Similarly, the diesel engine operates on the diesel cycle. Further, they have many differences relating to the types, uses and structure of both these engines. The main factor is the kind of fuel we use in them. Apart from that, there are also other differences like spark plugs, fuel injectors and more. Moreover, the type of vehicles that use them. So, we need to learn about these differences to understand them better.

Petrol engines are internal combustion engines. Moreover, they contain spark-ignition. Thus, they run on moderately volatile fuels like petrol. Further, you will see that the air and fuel in petrol engines usually mix post-compression. In addition, as we stated earlier, these engines operate on the Otto cycle. It comprises of two isochoric processes and two isentropic processes. Further, air and petrol in these engines are generally mixed in a carburettor before they launch them to the cylinder. So, through this, we see that the fuel ignites through an electric spark only when the air and petrol get compressed.

Diesel engines are also internal combustion engines. We also refer to it as the compression-ignition engine. Rudolf Diesel is the name of the person after whom these engines are named. To understand the difference between petrol and diesel engine, we need to know its mechanism first. The fuel injects in a combustion chamber and then ignites by the high temperature of the air in the chamber. Moreover, they have high temperatures of the air in their cylinders. It is because of the adiabatic compression. Thus, you see how diesel engines only compress the air and not fuel. Diesel fuel will undergo a spontaneous ignition when injected into the combustion chamber. Also, they work on the diesel cycle. It comprises of a continual pressure process, a constant volume process plus two isentropic processes.

Difference between Petrol and Diesel Engine 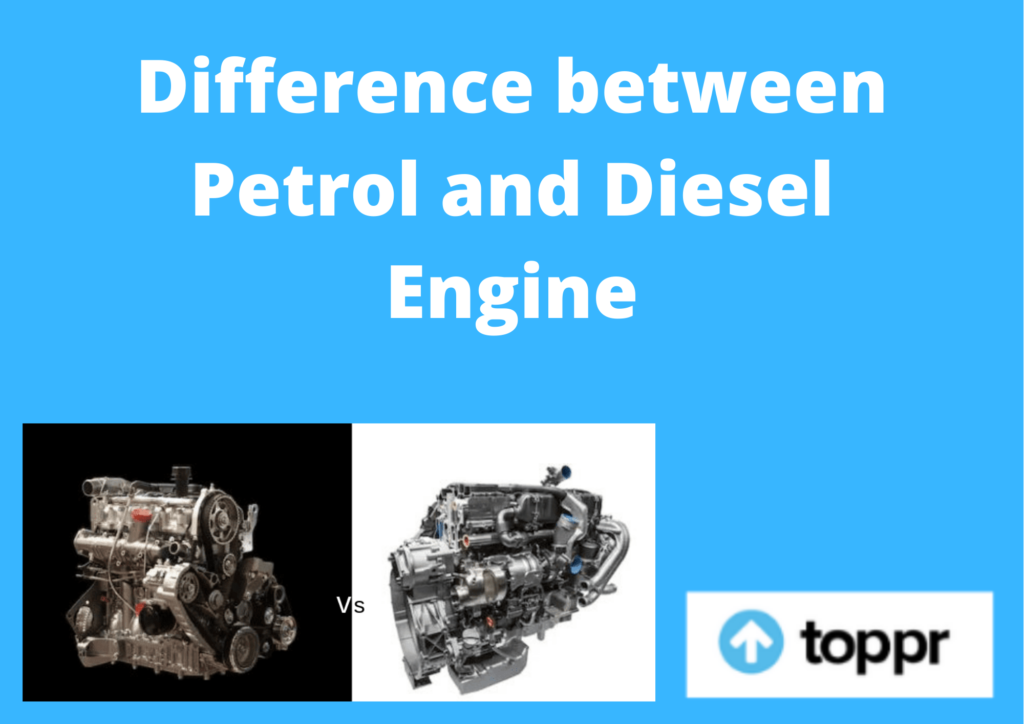 Most of them pre-mix fuel and air before compression. However, some modern petrol engines now make use of cylinder-direct petrol injection. An electronically controlled fuel injection does this pre-mixing.

We also refer to diesel engines as a compression-ignition engine. Moreover, they are self-igniting engines. It is because the air compresses and fuel injects into really hot air at the compression stroke’s end. Thus, the engine makes use of the heat of compression for initiating the ignition.

Rudolf Diesel, a German inventor, invented this engine in 1893. However, they came into use in the 1930s and got popular in the 1970s.

FAQs about Petrol and Diesel Engine

Question 1: What is the difference between petrol and diesel engine in terms of fuel consumption?

Answer 1: Petrol engines consume more fuel when we compare them to diesel engines.

Question 2: Which kind of engine do heavy vehicles use?