Studying the differences between evaporation and boiling becomes important for us because people confuse them with one another easily. Thus, it makes it essential to learn about their differences. So, when a liquid converts into vapour, we call it evaporation. For instance, when you dry your clothes in the sun, the water evaporates from them. On the other hand, boiling is when you heat up a liquid and the liquid’s temperature becomes greater than the boiling point of that substance. Thus, you notice how the occurrence is the key difference. Meaning to say, evaporation happens on the surface only while boiling happens over the liquid’s large mass.

Evaporation refers to a natural process which takes place in which the liquid changes into gas because of high temperature or pressure. It can take place at any temperature. Moreover, evaporation does not produce bubbles. It is important to note how evaporation is a natural process which we commonly witness in the water cycle. It can take place at any point in time, irrespective of the increase in temperature. For instance, when you leave a glass of water out on the table long enough, you will notice it’s water level going down without any interference from your side.

Boiling is when any liquid turns into gas when you heat it continuously. It occurs when the heat is at the boiling point. Moreover, it produces bubbles. Thus, you see it is the rapid vaporization of a liquid when it reaches its set boiling point. Most of the liquids have a boiling point which will result in a more agitated and rapid movement within the substance’s particles. It is also important to note that boiling is not a naturally occurring process most of the times, unlike evaporation.

Differences Between Evaporation and Boiling 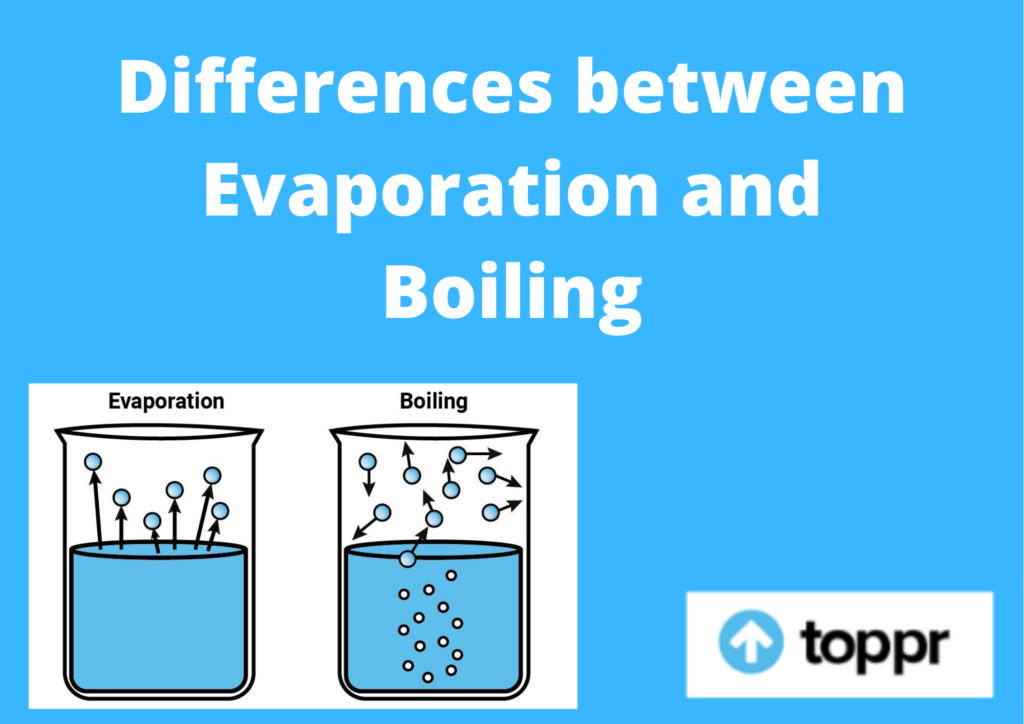 Importance Differences between Evaporation and Boiling

It is a process which occurs naturally and can be experienced in the natural world. It is one of the two forms of vaporization. In this process, atoms or molecules in a liquid state gain adequate energy to turn into the gaseous state.

Therefore, evaporation proceeds more quickly when at a high temperature and at high flow rates between gaseous and liquid phase in liquids having lower surface tension. So, we see evaporation is a physical change.

When you boil a liquid, it reaches temperatures higher than their melting point or boiling point. While boiling, the intense heat added to these liquid molecules starts moving rapidly throughout the substance.

You can determine when a liquid transcends its boiling point is when bubbles start forming. Thus, it means the liquid state of matter has entered into gaseous molecules of water vapour that release into the air.

FAQs about Evaporation and Boiling

Question 1: What are the differences between evaporation and boiling in terms of occurrence?

Answer 1: Boiling occurs all throughout the liquid whereas evaporation occurs at the surface of the liquid.

Question 2: Which of the two takes a longer time to complete?

Question 3: State some examples of evaporation.