One of the most confusing things is to find the differences between baking soda and baking powder. We use these two terms interchangeably, however, it is wrong. While we use both of these in baked eatables because of their ability to produce carbon dioxide causing the food to rise. In other words, baking soda is like a clean form of sodium bicarbonate. Whereas, baking powder does contain baking soda as well as other acidic and drying agents like starch. Basically, you can replace baking soda by baking powder but not the other way round.

When sodium bicarbonate alters with various acidic and basic components along with several acidic components, it results in Baking soda. Sodium bicarbonate in its purest form is essentially Baking soda. You will find baking soda present in limy substances. For instance, sugar, coffee, buttermilk and more. It helps in producing carbon dioxide under oven temperature in order to create quality baked items. If a person wishes to make a cake with baking soda, it will not be possible as it lacks the acidity which is essential for making cakes and muffins.

Baking powder results from the mixing of several acidic and drying agents along with baking soda. You can stimulate it by either humidity or some other substance. Basically, baking soda consists of three dry constituents, baking soda, corn starch and mono-calcium phosphate. The role these three constituents play is of a base, drying agent and acidic agent respectively. As we stated the main differences between baking soda and baking powder is of it replacing baking soda but not vice versa. We use this to make cakes, muffins because it contains helpful components like acid, base and chemicals. 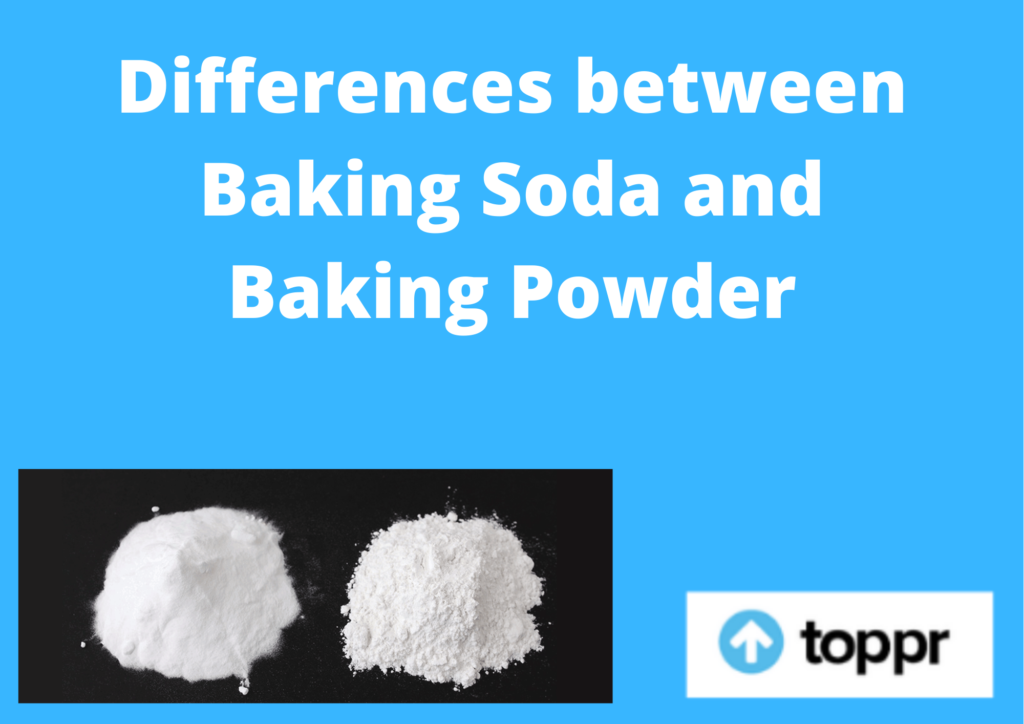 By now you know that baking soda is basically sodium bicarbonate. The chemical formula for the same is NaHCO3. It is a salt comprising of a sodium cation which is represented by Na+  and a bicarbonate anion which is HCO3–.

Moreover, it is a solid, white crystalline with a salty taste. It helps a lot in baking as it is a leavening agent. It is a substance causing foaming which softens the mixture. Further, we may also refer to it as sodium hydrogen carbonate.

This is also a leavening agent which is formed by the blend of an acid reacting with alkali reacting one. Further, you will see that these baking acids are tartrate, phosphate, plus sodium aluminium sulfate which we use alone or in a mixture.

Commonly, the baking powders found at commercial stores contain baking soda along with one or several salts for producing acidic reactions when we dissolve them in solvents.

Question 1: What are the differences between baking soda and baking powder in terms of ingredients?

Question 2: Which of the two gives fluffier baking products?