Every day in our surroundings, we observe millions of objects made out of matter. This matter contains molecules, that are a combination of two or more atoms which bond together. Thus, you can say that atoms bond together to create molecules. Consequently, molecules make up the objects which surround us. Thus, we must learn the difference between atom and molecule for a better understanding. Atoms are the smallest particles in any element which also possesses the properties of the element. Thus, we cannot see atoms with our naked eye. Nonetheless, they are the building blocks of each and every material. For instance, water is an example of an atom and molecules.

Atom is an infinitesimal particle distinctively identifying as a chemical element. It represents the elementary unit of ordinary matter which exists in free state and consists of all chemical properties. It contains a positively charged nucleus which negatively charged electrons surround. Moreover, the nucleus comprises of protons and neutrons that bond together at the middle of an atom. The masses of these protons and neutrons are almost equal. However, they vary in charge. So, the positive charge in an atom is the same as the negative charge, making it electrically neutral.

To understand the difference between atom and molecule, we need to understand what it means first. Molecules are small units of matter existing in a free state and representing the substance’s chemical properties. When two or more atoms are really close to each other, it results in an attraction between the atoms which we refer to as the chemical bond. This bond happens as a result of the exchange of electrons between the atoms which we call the covalent bond. Thus, when two or more atoms cluster together as one with covalent bond’s help, it creates a molecule.

Difference between Atom And Molecule 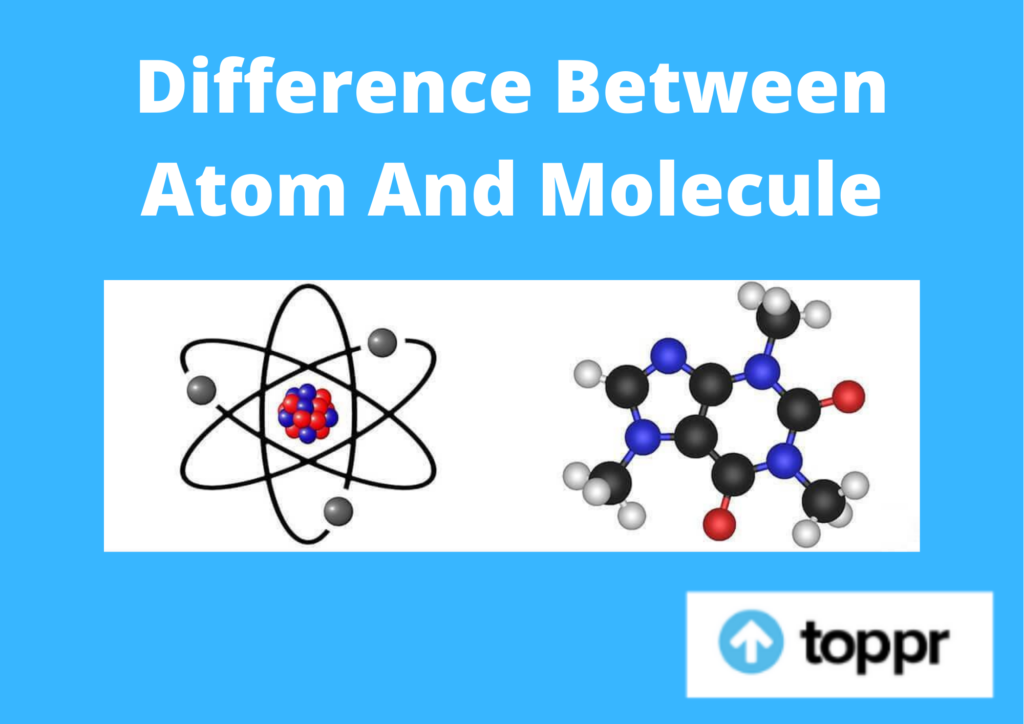 Important Difference Between Atom And Molecule

An atom is the smallest particle in any ordinary matter forming a chemical element. In fact, the air you breathe, the solids you see, comprise of either ionized or neutral atoms. An atom’s normal size is around 100 picometers i.e. 1 in a millionth part of a millimetre.

As they are so small in size, you cannot predict their behaviour. That is why we require quantum principles for this. There is a nucleus present in every atom with at least one electron bound with it.

When at least two atoms bound together with the help of chemical bonds, they form molecules. These are electrically neutral by nature. Moreover, molecules can sometimes be homonuclear.

In other words, it may contain atoms from a single chemical element. The best example is Oxygen. It can also be heteronuclear, meaning, it contains atoms from different elements like water.

FAQs about Atom And Molecule

Question 1: What is the difference between atom and molecule in terms of shape?

Answer 1: Atoms are spherical whereas molecules can be triangular, angular and linear in shape.

Question 2: Which of the two is more reactive?

Answer 2: Atoms are highly reactive with the exception of noble elements. On the other hand, molecules are not that reactive when we compare them to atoms.

Question 3: Which microscope can help you see atoms?