Everyone knows about Hydrogen. It is one of the most abundant elements on earth. It is in the air we breathe, the water we drink, the food we eat. But did you know that atomic hydrogen is not found on Earth? It only exits in its diatomic molecular form as dihydrogen. Let us study learn more about hydrogen.

Hydrogen can be said to be the simplest element in existence. The first element of our periodic table, hydrogen has one electron and one proton. The interesting part is that it does not have any neutrons inside its nucleus! This in turn also makes it the lightest element is known to us.

The discovery of hydrogen was done by Henry Cavendish in 1766. He discovered the inflammable air which was a product of reacting iron with sulphuric acid. The name Hydrogen comes from the Greek word “Hydro” meaning provider since hydrogen produces water on combustion.

A hydrogen atom is extremely reactive in its original form. It has one valence electron in its only shell, which makes it highly reactive and unstable. So hydrogen combines with another atom of hydrogen to give us Dihydrogen. We denote this as H2.

This molecular form of hydrogen is the most common form of hydrogen on earth. Since the molecule is neutral (has no charge) and its orbit is now complete it is a stable gas. Actually, a dihydrogen molecule (H2) is the smallest molecule on the planet. 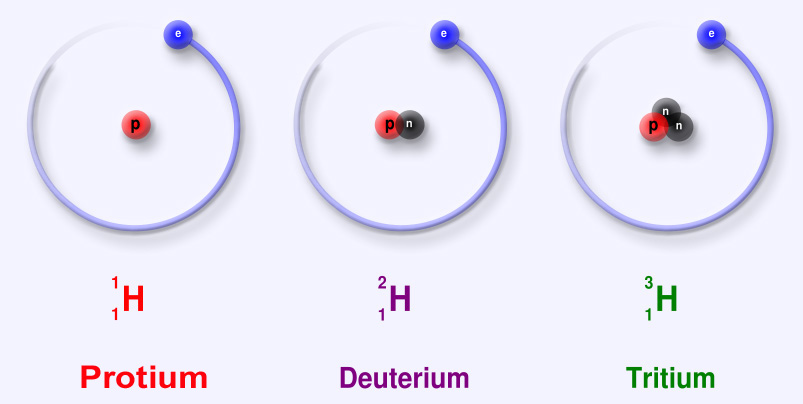 Hydrogen has three naturally occurring isotopes, namely Protium (1H), Deuterium (2H) and Tritium(3H). Of these, tritium is the only one not stable, it is in fact radioactive. The difference between the three is the number of neutrons

Q: Heavy hydrogen is used for which of the following?

Sol: The correct option is “B”. We use heavy hydrogen to study reaction mechanism as it is very easy to identify deuterium.

Q: The nuclei of tritium (H3) atom would contain neutrons equal to:

Sol: The correct option is “B”. The atomic number and mass number of Tritium are 1 and 3 respectively. So it contains 1 electron, 1 proton, and 2 neutrons.

Share with friends
Previous
Preparation and Properties of Dihydrogen
Next
Hydrogen