Aromaticity is a property of cyclic that is ring-shaped, planar that is flat structures with pi bonds in resonance. These electrons are delocalized with more stability compared to other geometric or connective arrangements with the same set of atoms. Aromatic rings are stable and do not break easily. Organic compounds that are not aromatic aliphatic compounds. These compounds are cyclic, only aromatic rings have enhanced stability. Common aromatic compounds are derivatives of benzene. Benzene is an aromatic hydrocarbon common in petroleum and its distillates. The word aromatic refers to benzene derivatives. Thou, many non-benzene aromatic compounds exist. 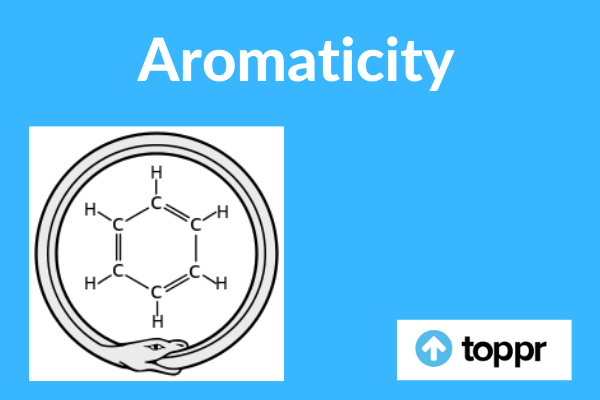 In terms of the electronic nature of the molecule, aromaticity gives a conjugated system often made of alternating single and double bonds in a ring. This allows for the electrons in the molecule’s pi system to delocalize around the ring by increasing the molecule’s stability. The molecule cannot be represented by a single structure, but rather by a resonance hybrid of different structures. For instance, the two resonance structures of benzene. In the model of aromatic rings, benzene is formed from a six-membered carbon ring with alternating single and double bonds.

Aromaticity plays a major role in the biochemistry of all living structures. The four kinds of aromatic amino acids are histidine, tryptophan, phenylalanine, and tyrosine. They serve as the 20 basic types of building-blocks of the proteins. Also, the 5 kinds of nucleotides i.e., adenine, cytosine, thymine, guanine, uracil are the main sequence within the genetic code present in the DNA and also RNA and these are aromatic purines and pyrimidines.

The green pigment in plants i.e., Chlorophyll has a kind of aromatic system. These compounds are important in the field of industry. Most of the key aromatic hydrocarbons that are of commercial interest are benzene, ortho-xylene, toluene, para-xylene. The hydrocarbons are made from complex mixtures that are obtained by the process of refining or distillation. It is utilized in the production of various kinds of chemicals like styrene, aniline, phenol, polyester, nylon.

An aromatic ring has a set of covalently bound atoms with specific characteristics:

Question 1: What are the four conditions for aromaticity?

Answer: Aromatic compounds are less stable and have many kinds of chemicals as well as synthetic uses. The nucleic acids and the amino acids that make up our cell structure make use of aromatic compounds. The aromatics compounds exhibit some special characteristics or rules that are given below-

Question 2: What is the Huckel rule of aromaticity?

Answer: According to the huckel rule of aromaticity, a molecule must have a certain number of lone pairs of electrons within p orbitals or electrons with pi bonds. It should be within a closed loop of adjacent, parallel p orbitals to become aromatic.