Natural gas has many uses but do you know it acts as a precursor of one of the most important and commercially dominant alkyne. Acetylene, commercially dominant alkyne, production is possible by partial oxidation of natural gas. What is the first naturally occurring acetylenic substance? The compound dehydromatricaria ester is the first naturally occurring acetylenic substance. It acts as the precursor for many compounds like acrylates as well as it acts as fuel. It was obtained from Artemisia species in the year 1826, according to Ferdinand Bohlmann. Isolation of acetylene is possible from natural sources such as plant species, marine sponges, corals, bacteria, and fungi. One such example is polyynes. In this topic, we will discuss nomenclature of alkynes and preparation of alkynes.

Alkynes are unsaturated hydrocarbons containing a triple bond between two carbon atoms. The least number of hydrogen atoms is present in alkynes among alkanes, alkenes, and alkynes. The general formula of this class of organic compound is CnH2n–2. The first stable of an alkyne is ethyne or acetylene.

Acetylene is essential alkyne and the compound finds its use for many different purposes such as arc welding. Acetylene in this example is present in the flame as oxyacetylene flame (mixing acetylene with oxygen). It is also the precursor for many other compounds. Therefore, it is essential and interesting to learn about the nomenclature and preparation of this class of organic compounds.

Refer to the below diagram to observe the structure of alkynes along with their respective common name and IUPAC name.

Isomerism is the phenomenon of two or more compounds demonstrating same molecular formula but different physical and chemical properties. We have studied about geometric isomerism and stereochemistry in the chapter chemical reactions of haloalkanes. However, to understand the proper nomenclature of alkynes it is important to understand the structural isomerism.

Isomerism can be divided into two different categories 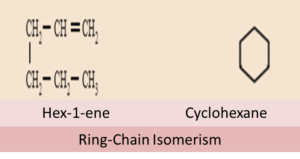 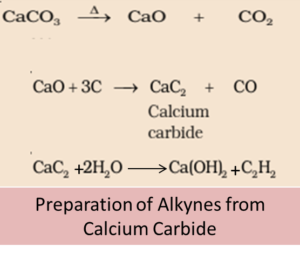 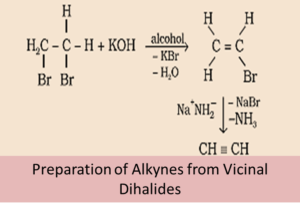 Question: Write the structures and IUPAC names of the different types of isomers corresponding to the fifth alkyne member. Identify the type of isomerism demonstrated by the compounds.

Solution: The formula for the fifth member of alkyne series is C6H10. There is the possibility of 7 different isomeric forms.

Hence, different pairs of isomers will exhibit position as well as chain isomers.