Conformation of Alkanes deals with the isomers of alkanes that form due to slight changes in their structure, especially in their carbon-carbon bonds. The conformations start with ethane and occur in all alkanes higher than ethane. Let us take a look.

What is Conformation of Alkanes?

In the organic chemistry, it is found that you can rotate a single bond of a molecule to change the arrangement of atoms, without changing the chemical formula of the compound. So isomers of a compound can be created by different forms of rotation about one single bond. So the different arrangements of atoms due to such rotations of bonds are known as conformations. 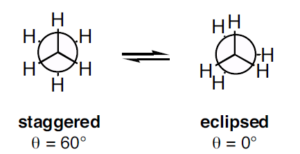 As we saw before there can actually be an unlimited number of conformations when it comes to ethane, due to its C-C single bond. But we will be focusing on two important conformers of ethane. These two conformations are the two most extreme and opposite possible conformations of ethanes.

When you see an ethane structure you will notice the single C-C bond. And every atom is also bonded to three atoms of hydrogen each. Now in the first conformation, the hydrogen bonded to the first carbon atom will line up with the hydrogen of the second carbon atom. The angle between the two planes i.e. is the dihedral angle is 0°. So if you see the first hydrogen atom can be said to be eclipsing the second one. Therefore this is known as Eclipsed Conformation.

Then there is the exact opposite of the eclipsed conformers. Here the hydrogen atoms bonded to the carbon atoms are as far away from each other as possible. The dihedral angle between the two concerned hydrogen atoms here is 60°. This conformation of alkanes also has a name, staggered conformation.

In ethane conformations, the eclipsed conformation is unstable. The two hydrogen atoms that line up together have unfavourable interactions, they repel each other. So staggered conformation of ethane requires less energy to be maintained and is more commonly found.

Representation of Conformation of Alkanes

Newman Projections: This is one of the ways to represent conformations of alkanes. It visually represents the bonding of atoms from front to back. A Dot represents the first carbon atom (the one that is nearer). The further carbon atom is a circle. Lines show the hydrogen atoms bonded to each carbon atoms. This representation clearly indicates the dihedral angles.

Question: On mixing certain alkane with chlorine and irradiating with ultraviolet light, it forms only one monochloroalkane. This alkane could be:

Solution: Option D. The number of monochloro products formed depends on the number of different sets of hydrogen.

Thus amongst the given options, neopentane gives only one monochloroalkane on chlorination.
Share with friends
Browse