Ethylene is the simplest form of organic compounds and is also known as an alkene. It contains carbon-carbon double bonds. \(H_{2}C=CH_{2}\) is the formula of ethylene and the IUPAC name of ethylene is ethane. Ethylene is colourless and is also flammable. It also has a sweet taste and odour.

The main source of ethylene is natural gas and petroleum. Ethylene also acts as a hormone in a plant which is also a natural source. Ethylene hormone inhibits the growth and promotes the leaf fall. It also helps fruits to ripen. Ethylene has a very important role in the chemical industry as it is used as an organic chemical in industry. 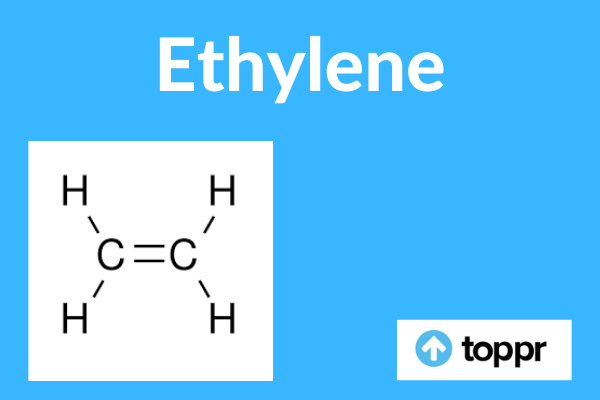 The use of ethylene falls into mainly two categories –i) monomer ii) as a starting material for other two-carbon compounds. The repetitive joining of small molecules of ethylene gives polyethylene. It is a polymer formed by the polymerization process. Polyethylene has so many uses as it is useful in the production of packaging films, wire coatings, squeeze bottles.

First the catalytic is pumped under high pressure into a reaction vessel. The polymerization process takes place under the influence of Ziegler Natta catalytic. After the polymerization process completes unreacted ethylene monomer, catalyst, and solvent exit in the other end of the reactor. After that unreacted ethylene is separated from the mixture and is returned to the reactor.

The catalyst is neutralized by the alcohol wash. The excess solvent is recovered from the mixture and recycled and then a dryer dehydrates the wet polyethylene and gives it’s a powder form. It is mainly useful as industrial alcohol. Ethylene oxide is also in use as antifreeze and polyester fibres and films. Ethylene and benzene combine to form ethylbenzene and it is dehydrogenated to styrene for use in the production of plastics and synthetic rubber.

1)t is a simple organic molecule present in the form of gas.

3)Scientist Gane first found that a gas evolved from a ripe apple and can also affect the ripening of green apple. Crocker recognized it as a plant hormone.

6)It helps to stimulate latex flow in the rubber tree.

7)If we give a low concentration of ethylene it increases the sennoside.

9)Ethylene is a gaseous hormone that results in transverse or isodiametric growth but it retards longitudinal growth.

10)It is a hydrocarbon that forms through the breakdown of methionine.

11)Ethylene has very low solubility in water and does not accumulate within the cell but diffuses out of the cell and escapes out of the plant.

12)Ethylene is produced by almost all the organs but maximum production occurs in ripening fruits and senescent leaves.

13)It also affects stem diameter and height. When the stems of the trees are subjected to wind it causes lateral stress and results in greater ethylene production occurs. Hence the tree trunks become more sturdy.

Ethylene promotes senescence which means loss of a cell’s power of division and growth. Ethylene helps in the ripening of fruit. It helps in increasing the length of petiole and internode of leaves as the leaf could come out of deep water and perform photosynthesis. Ethylene also helps in seed dormancy and also promotes seed germination in groundnut seeds specifically.

It also helps in the sprouting of potato tubers. One of the most important functions of ethylene as it is useful as an artificial solution named ethaphone which is in use as the ripening of fruit artificially. Ethaphone causes thinning of cotton fibre and also the thinning of the skin of walnut. Ethaphone also promotes the formation of female flowers in cucumber. Ethylene helps in flowering in pineapple.

It decreases the sensitivity to gravity. It promotes Apo geotropism in roots.

Abscission of various parts such as leaves, flowers, fruits is stimulated by ethylene which induces the formation of hydrolases.

It seems that the formation of abscisic acid in the leaves under is mediated through ethylene. Also, it increases the absorption surface of the plant roots.

In the signalling pathway, the role of the signalling molecule or ligand is mainly played by the ethylene and the receptor is going to be ethylene response-1(ETR-1). It is a copper ion-based receptor which used to do proper function in presence of copper. The transporter of copper ion is RAN-1. The location of the receptor is ER membrane and the receiver is present at ER lumen. The regular pathways are ETR-1, EFR1, CTR1, EIN2, EIN3. It also follows a two-component signalling pathway. Receptors are negative regulators because the binding of ethylene inactivates the receptor. Response to ethylene Arabidopsis is mediated by a family of five receptors such as ETR1, ETR2, EIN4, ERS1, ERS2.

Q.1 Is there any possibility that ethylene polymerizes under mild conditions in the absence of a catalyst?

Q.2: Describe the possibilities of the banana not ripening evenly.

Answer: The main reason for bananas not ripening evenly is the insufficient amount of ethylene. Maybe there is a possibility of an air leak which reduces the level of ethylene. Maybe the fruit is harvested which is not yet reached the mature stage. If a room is full of fruits with different characteristics then there is a chance of the banana not ripening evenly. If the fruit has been held for a longer time then the ripening results will vary inevitably.

Answer: Ethylene causes the rapid death of cut flowers and it causes vegetables to go yellow. Ethylene also causes bud damage in dormant nursery stocks. It is also harmful to humans as liquid ethylene can cause headaches, fatigue, frostbite. Ethylene is flammable gas so it can cause fire and explosion hazards. Excess use of ethylene can cause early rot of the fruit so farmers should be careful.