Electron configuration is applied in nuclear physics and quantum chemistry. It tells us that every electron is moving independently in an orbit, in a mean-field created by all other orbitals. Laws of quantum physics states that, for systems with just one electron, a level of energy is related to each electron configuration. In certain conditions, electrons are even ready to move from one configuration to a different by the emission or absorption of a quantum of energy, within the sort of a photon. 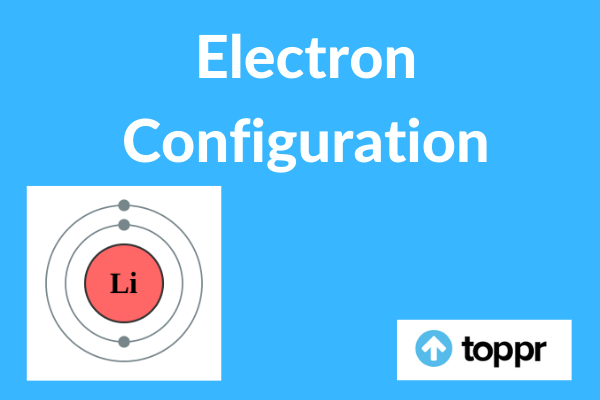 What is Electron configuration?

In simple words, the electron configuration of an atom is the representation of the arrangement of electrons distributed among the orbital shells and subshells. Commonly, the electron configuration is useful to explain the orbitals of an atom in its state. But it also can represent an atom that is ionized into a cation or maybe an anion by repaying with the loss of or gain of electrons in their subsequent orbitals.

Electron configuration at first came in light under the Bohr model of the atom. A group is that the set of allowed states that share an equivalent principal quantum number, n (the number before the letter within the orbital label), that electrons may occupy. An atom’s nth group can accommodate \(2n^{2}\) electrons, e.g. the primary shell can accommodate 2 electrons, the second shell 8 electrons, the third shell 18 electrons then on.

A subshell is that the set of states defined by a standard azimuthal quantum number, ℓ, within a shell. The value of ℓ is within the range from 0 to n-1. The values ℓ= 0, 1, 2, 3 correlate to the s, p, d, and f labels, respectively. For instance, the 3d subshell has n = 3 and ℓ = 2. The utmost number of electrons which will be placed during a subshell is given by 2(2ℓ+1). This results in two electrons in a s subshell, six electrons during a p subshell, ten electrons in a d subshell and fourteen electrons in an f subshell.

The numbers of electrons which will occupy each shell and every subshell arise from the equations of quantum physics, especially the Pauli exclusion principle.

Physicists and chemists use a typical notation to point the electron configurations of atoms and molecules. In case of atoms, the notation is a sequence of atomic subshell labels (e.g. for phosphorus the sequence 1s, 2s, 2p, 3s, 3p) with the number of electrons assigned to every subshell placed as a superscript. For instance, hydrogen has one electron within the s-orbital of the primary shell, so its configuration is written \(1s^{1}\). Now let’s take two-electron into account like in case of lithium. Lithium’s 1s-subshell has two-electron and one within the (higher-energy) 2s-subshell, so its configuration is written \(1s^{2}2s^{1}\).

The electron configuration can be seen because the core electrons, equal to the inert gas of the preceding period, and therefore the valence electrons: each element during a period differs only by a previous couple of subshells. For a given configuration, the order of writing the orbitals isn’t completely fixed since only the orbital occupancies have physical significance. For instance, the electron configuration of the titanium state are often written as either \(\left [ Ar \right ]4s^{2}3d^{2} or \left [ Ar \right ]3d^{2}4s^{2}\).

It is quite common to ascertain the letters of the orbital labels (s, p, d, f) written in an italic or slanting typeface, although the International Union of Pure and Applied Chemistry (IUPAC) recommends a traditional typeface.

Irving Langmuir is the first one to propose in his 1919 article “The Arrangement of Electrons in Atoms and Molecules”. Langmuir had developed his work on electron atomic structure from other chemists as is shown within the development of the History of the table and therefore the Octet rule. Bohr (1923) incorporated Langmuir’s model that the periodicity within the properties of the weather could be explained by the electronic structure of the atom.

In 1924, E. C. Stoner, however, used Sommerfeld’s third quantum number in his experiment. He used the said number in the outline of electron shells and properly predicted the shell structure of sulfur to be 2.8.6. The Schrödinger equation, published in 1926, gave three of the four quantum numbers as an immediate consequence of its solution for the hydrogen atom. This solution yields the atomic orbitals which we see today in chemistry books.

The energy associated with an electron is actually linked with its orbit. The configuration that corresponds to the lowest electronic energy is known as the ground state, while all other configurations are excited to state.

It states that ” a maximum of two electrons are put into orbitals in the order of accelerating orbital energy: at first the lowest-energy orbitals are fill in before electrons are placed in higher-energy orbitals.”The principle works alright (for the bottom states of the atoms) for the primary 18 elements, then decreasingly well for the subsequent 100 elements. Today’s Aufbau principle follows Madelung’s rule to describe an order of orbital energies. It states that,

In relation to atomic orbitals, an open shell may be a valence shell which isn’t completely crammed with electrons or that has not given all of its valence electrons through chemical bonds with other atoms or molecules during a reaction. Conversely, a closed shell is obtained with a totally filled valence shell. This configuration is extremely stable.

In the case of molecules, “open shell” means that there are unpaired electrons. Alternately, a closed-shell configuration means such a state where all molecular orbitals are either doubly occupied or empty (a singlet state).

The major use of electron configuration is in the field of rationalization of chemical properties, in both inorganic and organic chemistry. In effect, electron configurations, alongside some simplified sort of molecular orbital theory, became the fashionable equivalent of the valence concept, describing the amount and sort of chemical bonds that an atom is often expected to make.

This approach is taken further in computational chemistry, which usually attempts to form quantitative estimates of chemical properties. For several years, most such calculations relied upon the “linear combination of atomic orbitals” (LCAO) approximation, using an ever-larger and more complex basis set of atomic orbitals because the start line. The last step in such a calculation is that the assignment of electrons among the molecular orbitals consistent with the Aufbau principle.

Q.1. Why is Hund’s rule important?

Answer – You need to know the ground state of an element to further determine the orbital/electron configuration of an ion. This is the reason why Hund’s rule is important.

Q.2. What shape are p orbitals?

Answer – It has the almost shape of a pair of lobes on opposite sides of the nucleus. It is also known as dumbbell shape.

Q.3. How many electrons are in Heliums outermost shell?