Science depends on the practical applicability of every experiment! Theoretically, the gas laws, from Boyle’s law to Avogadro’s Law seem right, but what about their practical appliance? Real Gases generally observe the various findings of the Gas Laws under controlled physical conditions, but also show deviations from them, let’ see how!

We already know the Ideal Gas Equation pV= nRT. It defines the relationship between Temperature, pressure, and volume of gases. For checking the reliability of this relationship we first plot a graph between pV and p. Now we know that at a constant temperature, as the Boyle’s law states, pV shall be a constant. Therefore the graphs between the two (p and pV) shall be a straight line. But the case is not so! At temperature 273 K the data for several gases is shown in the graph below: 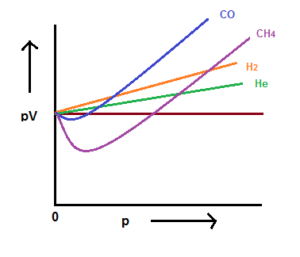 From our next graph that plots the volume to pressure data of gases, we find an apparent deviation from the theoretical prediction of gases in changed conditions. From the graph, we can figure out that at very high pressures the value of volume we calculated is less than the actual practical volume. Hence from the above two graphs, it is clear that generally real gases, under all conditions do not follow The Ideal Gas Behaviour or equation.

The question now is that why do gases deviate from the ideal behaviour? The answer lies in the basic behaviour of these gases. We already know that the intermolecular forces between gases are minimal, the reason being the scattered molecules in the gaseous state.

This negligible intermolecular force is the secret behind the deviation of real gases from the ideal gas. Molecules in the gases, interact with each other. Though the interaction is weak at high temperatures, yet with decreasing temperature the interactive forces increases. At high pressure also, these molecules come close to each other, hence leading to a decrease in volume.

Now from the above difference, it is clear that in ideal gases the pressure exerted by molecules on the container is greater than that exerted by real gases, so pideal = preal + an2/ V2; an2/ V2 here is a constant and is known as the correction term.

Let Z = pV/nRT be a number. it will have no units as is clear from the equation. What does this number signify?

For perfect ideal behaviour, Z = 1 at all temperatures and pressures, because if Z=1 then pV= nRT. The temperature at which a real gas follows an Ideal gas law is known as the Boyle temperature or Boyle point. The Boyle point doesn’t depend on physical conditions, rather it is dependent on the nature of the gas.

Generally, at low pressure, all gases show ideal behaviour hence giving Z as = 1. Lower the pressure, greater the volume. If Z ≠ 1, then the gas is not ideal but real. Hence with the help of the compressibility factor, we can find the measure of the deviation of real gases from the ideal behaviour.

Solved Examples From You

Q : Assertion: CH4, CO2 has a value of Z (compressibility factor) less than one at 0oC.

Reason: Z < 1 is due to the fact that the attractive forces dominate among the molecules.

Solution: A) As we discussed above, the compressibility factor tells us about the measure of the deviation of real gases from the ideal behaviour. If you look at the plots of Boyle’s law for these gases as given above, you will find that the assertion is true. This is due to the attractive forces of the gases.