Gases are difficult to transport. Due to their physical properties, it is almost impossible to transfer them from one place to another. For the same purpose, the gas is transformed into a liquid. Study of liquefaction of gases tells us about changes in the properties and structure of a gas. It also gives valuable information about the structure of matter in general. Let’s see how.

Table of content
1 Suggested Videos
2 Liquefaction
2.1 Browse more Topics under States Of Matter
2.2 Critical Temperature, Volume, and Pressure
3 Isotherm of Carbon Dioxide
3.1 Equilibrium state
3.2 Gases to liquids
3.3 Understand what is Molar Volume in this Video
3.4 Effect of Compression and Cooling
4 Solved Example for you:

Liquefaction is the transformation of a gaseous substance into its liquid state. This change is the outcome of change in physical conditions like temperature, pressure, and volume. Thomas Andrew was the first person to study the change of state from gases to liquids in Carbon Dioxide. It was later discovered that most real gases behave like Carbon Dioxide (CO2) and change from gases to liquids if optimum physical changes in temperature and pressure are achieved.

In his experiment on CO2, Andrews came to a conclusion that at high temperatures, despite high pressure, the gases cannot be liquefied. Also with the increase in temperature, the gases show significant deviation from the ideal behavior. In the case of carbon dioxide, at 30.98° C, the gas started changing into a liquid.

The graph between the Pressure and Volume at a given constant temperature is the isotherm. On studying the isotherm of Carbon dioxide we get to know the different intervals of temperatures at which a gas can show signs of liquefaction: 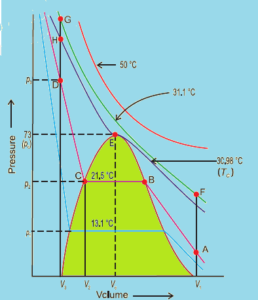 On studying the isotherm above we get to know the physical change of state temperature wise. Volume and pressure play a vital role in the change of state. In the above isotherm, we study the liquefaction of Carbon dioxide.

We see that the gaseous state of carbon dioxide changes to liquid at 30.98° C. The curve changes at a lower temperature, while at the higher temperature it does not show any change. At 30.98°C, the gas shows considerable deviation from the ideal gas behavior.

Here we notice that the curve at increased pressure signifies compressibility of liquid CO2 while the steep line pertains to the isotherm of the liquid, slightest of compression results in a sharp rise in the pressure, thus indicating the amount of compressibility of CO2. On attaining 21.5° Carbon dioxide behaves like a gas until point B.

The point B shows signs of liquid CO2 . The gas now exists in the dual form i.e both liquid and gas. At this stage compressing further does not affect the pressure on the gas, rather it results in condensation. At point C, all the CO2 gas has condensed and further compression results in the rise in pressure.

From the above isotherm it is clear that at point A, CO2  exists in the gaseous state while at point D it exists in a liquid state. At point D the compression of the liquid CO2 is almost impossible. At point C an equilibrium state between the two states of matter is seen.

We already know that the compressibility factor is the ratio of the original volume of a gas to the molar volume, now if the value of Z is in positive or greater than 0 then it shall need both cooling and compression for the change of state.

Understand what is Molar Volume in this Video

Effect of Compression and Cooling

Solved Example for you:

Ans. N2 (nitrogen) liquifies easily. Intermolecular forces are high for gases which have a high critical temperature, making the change of state fast.