During high pressure or high-temperature conditions, a tyre inflated with air is at the risk of bursting. Or while climbing a mountain you start feeling problems to inhale? Why is it so? With changing physical conditions the behaviour of gaseous particles also deviates from their normal behaviour. The behaviour of a Gas can be studied by various laws known as the Gas laws. Let us see more!

All gases generally show similar behaviour when the conditions are normal. But with a slight change in physical conditions like pressure, temperature or volume these show a deviation. Gas laws are an analysis of this behaviour of gases. The variables of state like the Pressure, Volume and Temperature of a gas depict its true nature. hence gas laws are relations between these variables. Let us study more about the important gas laws!

Boyle’s law states the relation between volume and pressure at constant temperature and mass. Robert Boyle conducted an experiment on gases to study the deviation of its behaviour in changed physical conditions. 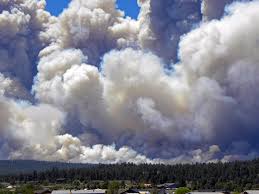 It states that under a constant temperature when the pressure on a gas increases its volume decreases. In other words according to Boyle’s law volume is inversely proportional to pressure when the temperature and the number of molecules are constant.

k1 here is a proportionality constant, V is the Volume and p is the pressure. On rearranging, we get: k1= pV. Now, if a fixed mass of gas undergoes an expansion at constant temperature then the final volume and pressure shall be p2 and V2. The initial volume and initial pressure here is p1 and V1 then according to Boyle’s law: p1×V1 = p2×V2 = constant (k1)

So according to Boyle’s law, if the pressure is doubled then at constant temperature the volume of that gas is reduced to half. The reason being the intermolecular force between the molecules of the gaseous substance. In a free state, a gaseous substance occupies a larger volume of the container due to the scattered molecules.

When a pressure is applied to the gaseous substance, these molecules come closer and occupy a lesser volume. In other words, the pressure applied is directly proportional to the density of the gas. Boyle’s law can be graphically represented  as follows: 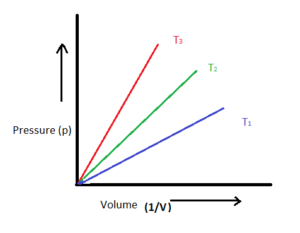 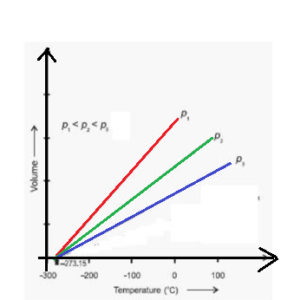 The graphical representation of Charles law is shown in the figure above. Its an isobar graph as the pressure is constant with volume and temperature changes under observation.

Also referred to as Pressure-Temperature Law, Gay Lussac’s Law was discovered in 1802 by a French scientist Joseph Louis Gay Lussac. While building an air thermometer, Gay-Lussac accidentally discovered that at fixed volume and mass of a gas, the pressure of that gas is directly proportional to the temperature. This mathematically can be written as: p \(\propto\) T

The temperature here is measured on the Kelvin scale. The graph for the Gay- Lussac’s Law is called as an isochore because the volume here is constant. 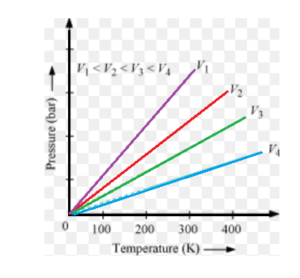 Amedeo Avogadro in 1811 combined the conclusions of Dalton’s Atomic Theory and Gay Lussac’s Law to give another important Gas law called the Avogadro’s Law. According to Avogadro’s law, at constant temperature and pressure, the volume of all gases constitutes an equal number of molecules. In other words, this implies that in unchanged conditions of temperature and pressure the volume of any gas is directly proportional to the number of molecules of that gas.

The number of molecules in a mole of any gas is known as the Avogadro’s constant and is calculated to be 6.022 * 1023. The values for temperature and pressure here are the standard values. For temperature, we take it to be 273.15 K while for the pressure it equals 1 bar or 105 pascals. At these Standard Temperature Pressure (STP) values, one mole of a gas is supposed to have the same volume. Now, n = m/M

This means that at an unchanged temperature and pressure conditions, the molar mass of every gas is directly proportional to its density.

The above gas laws provide us with an indication of the various properties of gases at changed conditions of temperature, pressure volume and mass. These laws seem trivial but these find great importance in our day to day lives. From breathing to hot air balloons and vehicle tyres the deviation in gaseous behaviour in changed conditions may affect all. So the next time you are travelling just remember the effect change in physical conditions can have!

Q: The rate of diffusion of hydrogen is about: