Why are solids tough and why do liquids flow? Why are gases liquifiable? The states of matter have their characteristic properties. These properties like the toughness or fluidity arise due to the forces of attraction between the constituents of the substance. They are known as the intermolecular forces. Let’s see!

Atoms and molecules constitute most of the matter that is around us. Every molecule or an atom exerts a force of attraction or repulsion on the other constituents. This force is known as the intermolecular force. These forces are responsible for holding together of a substance. Intermolecular forces are of two types: attractive forces and repulsive forces.

The attractive intermolecular forces are also called van Der Waals forces which in honour of a Dutch scientist Johannes Van der Waals. Using these forces Van der Waals describes the deviation of a real gas from the ideal gas law. The attraction is mainly a result of the electrostatic forces. However, there can be other causes of attraction between two or more constituents of a substance. Therefore we have many types of intermolecular forces as:

First demonstrated by Fritz London, these forces are the weakest amongst the other van der Waals forces. The following example will clearly describe the dispersion forces: 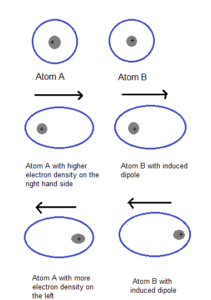 The figure above illustrates the London forces or the dispersion forces between two atoms close to each other. When moving randomly in an atom, the electrons may get collected at a point hence making that part electrically denser than the other. This unsymmetric placement of electrons leads to the development of an instantaneous dipole for a very short interval in atom A.

Now, this temporary dipole disturbs the electron density of the closeby atom B, hence resulting in an induction of dipole in atom B as well. This temporarily formed dipole between the two atoms is gradually induced in other molecules as well. A force of attraction is thus present that binds the atoms A and B for a small time. The London Forces are always attractive in nature and the interaction energy of the atoms here is inversely proportional to the 6th power of the distance between two atoms.

Since the dipole attraction is between two atoms in close vicinity to each other the force of attraction decreases with the increasing distance. The dipole-dipole force varies with movement. For stationary molecules, the dipole-dipole interaction energy is inversely proportional to the third power of r (1/r3 )  while for molecules showing movement in the form of rotation the interaction energy is 1/r6  ‘r’ here symbolizes the distance between the polar molecules. 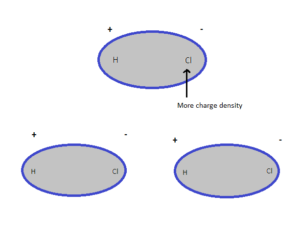 Like London forces, here also the energy of interaction is inversely proportional to the 6th power of the distance between the particles. One thing to be noted here is that, in induced dipole, the dipole moment depends on the dipole moment present in a permanent dipole particle and the polarizability of the other electrically neutral molecule. 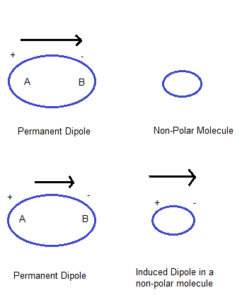 Hydrogen bonds are the bonds associated with Hydrogen and a more electronegative atom like oxygen. This bond signifies special case of any dipole-dipole interaction and is found in molecules where N-H, O-H or H-F bonds are found.

When Hydrogen is bonded to a more electronegative atom, a positive charge is set up on it. As a result, the other atom (say O in H2O) gets a negative charge. When the Hydrogen of one atom comes closer to the Oxygen of another atom, they strongly attract each other. Therefore a kind of “bond’ is formed which we call the Hydrogen bond.

Generally, Hydrogen forms a bond with N (Nitrogen), O (Oxygen) and F (Fluorine). It also bonds with Cl (Chlorine) to form a Hydrogen Bond. Hydrogen bonds have an extremely high amount of energy, approximately 10 to 100 kJ mol-1. This is a quite high energy, making these bonds a powerful force. This bond plays an eminent role in many compounds, proteins, and nucleic acid, the reason being their force.

Q: What happens to the London forces, if the number of electrons increases?

Share with friends
Previous
Liquefaction of Gases
Next
Behaviour of Real Gases: Deviation from Real Behaviour