What is so special about a gas? The structure of all matter is connected to the behavior and structure of the gaseous state. The Kinetic theory of gases studies the molecular or the atomic structure of this state. The theory is based on some assumptions or axioms. Let us find out more!

The Kinetic molecular theory provides the microscopic model of gases and gives us a picture of the behavior of gases. We have already had a look at the gas laws which depict the changing behavior of gases with changing physical conditions.

The question for the people studying these laws was to explain the cause of such behavior. As the findings of Kinetic theory of gases related to the behavior of molecules and atoms, this theory tries to answer such questions. It relates the physical changes in a gas with the microscopic behavior of the gases. 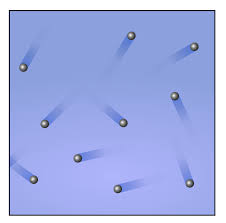 Postulates of the Theory

Kinetic Molecular theory intensely outlines the molecular behavior of a gas. The theory is based on the following postulates:

No Force of Attraction

At normal temperatures and pressures, gaseous molecules generally lack attraction forces. You might have noticed that a gas occupies the whole space, irrespective of the shape of the container. It is when the temperature decreases and the pressure increases, that the force of attraction between the molecules starts to build.

Now how do we say that the molecules in gases have almost nil force of attraction? The property of gases to occupy the available space instantly proves this assumption.

A large amount of space between the molecules gives them the room to be always in motion. Gases do not have a fixed shape, this shows that the gaseous molecules are always in a random motion. The scattered shape filling behavior of the gaseous element signifies the constantly moving gas molecules.

The molecules of gases move in a straight line, in all directions. And with such random motion, these molecules are bound to collide with one another. The highly mobile molecules in their course of motion collide with the walls of the container, thus exerting pressure on these walls.

The Kinetic energy stored in the various molecules is never static or constant. It is always changing. The kinetic energy of an object is by virtue of its motion or movement. Since the different molecules or atoms in gases are always in a random motion they move with different speed. Each molecule with a changing speed of its own shows changing levels of kinetic energy.

The changing speed of molecules is also because these particles randomly move in any direction, thence collide. As soon as the collision occurs it is obvious that the speed changes. This results in the changing Kinetic energy of the gaseous element. Now if we presume that the initial speed of the particles is same, yet due to the ever- repeating collision between these molecules the final speed changes constantly. The changed speed in these gaseous molecules results in the changed Kinetic energy level.

Like the speed of a moving car with no definite speed, molecules and gas atoms of a gas show a similar behavior in terms of Kinetic energy. The never-ending, movement of molecules and particles results in a changed Kinetic Energy. Since for calculating the kinetic energy, we use the equation: K.E =1/2 mv2, and with the changing speed, the K.E is bound to change.

Kinetic energy like the speed of the car is measured in the form of Average Kinetic energy. The variable speed gives a variable K.E, so for matters of high precision, we use average kinetic energy to keep a track over the changing scenario of the energy system.

From the postulates of Kinetic Molecular Theory, we now understand the basic nature of molecules in the gaseous state. Kinetic theory supports the various gas laws. The Kinetic theory of gases helps in interpreting the experimental observations of the gas laws.

Q.1 If a gas is expanded at constant temperature:

Solution: b) Temperature is the function of Kinetic Energy, so if Temperature remains constant, the K.E of the molecule also remains the same.

Share with friends
Previous
Outcomes of Democracy
Next
The Liquid State