A subsidy, often viewed as the discussion of a tax, is an instrument of fiscal policy. Derived from the Latin word ‘subsidium’, a subsidy factually implies coming to support from behind. Subsidies are useful for both economy and citizens as well. These have a long-term impact on a financial system like green revolution etc. These are only for the reason that farmers receive good quality of grain on subsidized prices.

Table of content
1 Suggested Videos
2 Subsidies
3 Transfers and Subsidy
3.1 Mode of Administering a Subsidy
4 Subsidy Targeting
5 Effects of a Subsidy
6 Subsidy Issues in India
7 Methodology for Estimation of Subsidies in India
8 Solved Example for Tou

Subsidies, by means of creating a block between consumer prices and producer costs, lead to changes in demand or supply decisions. These are often aimed at:

Transfers which are directly income supplements need to be distinguished from a subsidy. An unconditional transfer to an individual will add to his income and will distribute it over the entire range of his expenditures.

A subsidy, however, refers to a particular good, the relative price of which has been lesser because of the subsidy with a view to changing the consumption/ distribution decisions in favor of the subsidized goods. Even when the subsidy is hundred percent, i.e. the good is supplied free of cost, it should be distinguished from an income-transfer (of an equivalent amount) which need not be spent completely on the subsidized good.

Mode of Administering a Subsidy

The range of alternative means of administering a subsidy are:

A subsidy can be spread among individuals according to a set of selected criteria, e.g. merit, income-level, social group etc. Two types of errors arise if we do not do the proper targeting, i.e. exclusion errors and inclusion errors. In the previous case, some of those who deserve to receive a subsidy are disqualified. While, in the second case, some of those who do not deserve to receive subsidy get integrated with the subsidy programme. 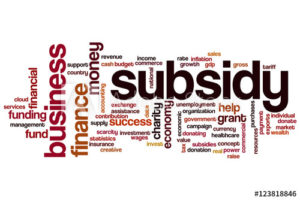 Effects of a Subsidy

We can generally group the economic effects of a subsidy into:

Subsidies have greater issues than before in India for several reasons. In particular, we can trace this rise to the following:

Methodology for Estimation of Subsidies in India

Different approaches and conventions have changed regarding measurement of the magnitude of subsidies. Two major conventions relate to measurement through (i) budgets and (ii) National Accounts.

The comparative distribution of the benefits of a subsidy may be studied with respect to different classes or groups of beneficiaries such as consumers and producers. Thus, the various examples of subsidies are:

The government gives subsidies in various sectors. Which of the following are the special effects of subsidies?

Pick the correct answer using the codes given below.

Ans. b) 2 only. There is no straight relation between subsidies given and inflation. It may increase inflation (eg. subsidies on LPG helping people save more, as a result, increasing their capacity which can cause demand-pull inflation.) or decrease inflation by making easy to get to low cost subsidized goods. Subsidies certainly increase the fiscal deficit. Subsidies increases do not decrease the export competitiveness of goods, as a result, it decreases their cost of production.