Carboxylic Acids are one of the imperative organic compounds found in a wide variety of living things. The Carboxylic Acid is part of the amino acids and amino acids are the building block of proteins. We all have heard about vinegar. Do you know that acetic acid, one of the type carboxylic acids, is responsible for the formation of vinegar?

It is a group of an organic compound containing a carboxylic group (C(=O)OH). Carboxylic acid contains a carbonyl group to which the hydroxyl is attached. The general formula of the group is R-COOH. In the formula, R denotes the rest of the group attached to the functional group. The structure of carboxylic acid is

Methods of Preparation of Carboxylic Acids

It is important to remember that acidified oxidizing agents like potassium dichromate and Jones reagent lead to the formation of esters in a small amount. Therefore, it is preferable to use neutral or alkaline agents such as potassium permanganate for this preparation method. 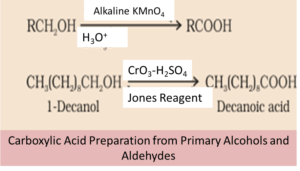 The resulting side products of the reaction vary depending on the primary or secondary alkyl groups. However, the tertiary alkyl group is not affected. Moreover, properly substituted alkenes can also undergo oxidation process to form carboxylic acids with the help of these oxidizing agents. Refer to the example below for the reactions under this preparation technique.

Nitriles undergo hydrolysis to form amides. The amides further undergo reaction in the presence of a catalyst which then to form carboxylic acids. The catalyst for this reaction is H+ or OH–. Furthermore, application of mild reaction condition helps in ceasing the reaction in the amide stage

You can download Aldehydes, Ketones and Carboxylic Acids Cheat Sheet by clicking on the download button below

Amide undergoes hydrolysis in the presence of catalyst H+ or OH– to form carboxylic acids.

Preparation from Acyl Halides and Anhydrides Share with friends
Previous
Comma: See how a comma can change the meaning of a sentence!
Next
Poors and Causes of Poverty