We are not afraid to die if we can all be together summary tells about the extreme bravery and skill exhibited by Gordon Cook. Gordon Cook’s family and crewmen in a war with water and the waves for existence. In the month of July in the year 1976, the writer, his wife Mary, his son Jonathan and his daughter Suzanne set sail from Plymouth, in England to duplicate the round-the-world journey made 200 years ago by Captain James Cook. They took the trip in their professionally designed ship, named the Wavewalker, accompanied by 2 sailors. Larry Vigil, who was an American and Herb Sailor, a Swiss, to tackle one of the world’s coarsest oceans – the Southern Indian Ocean. 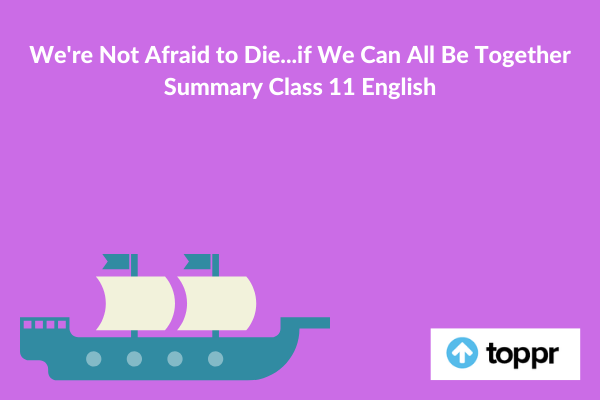 The first portion of the journey that is about 1,05,000 kilometres up to Cape Town passed off very enjoyably. On the 2nd day out of Cape Town, they started to encounter strong windstorms. Windstorms did not worry about the narrator. But the height of the waves was alarming up to fifteen meters above that was as high as the mainmast. On the 25th of December, the writer’s ship reaches in the southern Indian Ocean that was about 3,500 kilometres to the east of Cape Town. The family welcomed the New Year on the ship.

At the dawn of 2nd January, the waves were huge in size. Unfriendly weather and massive waves forced the sailors to slow the speed of the ship, drop the storm jib and take various other precautions. The risk was so obvious that the sailors accomplished a life-raft drill, attached the lifeline boats and the life jackets. Unexpectedly at 6 pm, a terrific explosion shook the Wavewalker and the writer was thrown overboard. The Wavewalker was about to overturn when another massive wave hit it throwing it upright one more time. The writer was thrown back again on the deck, his head and ribs were smashing touching the walls of the Wavewalker. In spite of a lot of injuries, the writer took charge of the situation and decided to handle it on his own. Larry and Herb started pumping out water from the ship.

The author somehow managed to cover the canvas across the gaps to stop the water from entering into the ship. Moreover, their hand pumps stopped functioning and the electric pumps short-circuited at the same time. Luckily, the writer found a spare electrical pump that was in a working condition. The entire night everyone was pumping, steering, repairing and sending radio signals for help. The author checked the charts and found that He Amsterdam, a French scientific base was their last hope.

Sue and Jon got heavily injured. But, they were not afraid to die if they were all together. Sue’s head got swelling and she was having a deep injury. Moreover, the writer became extra determined to see the courage of his children. Finally, they were able to touch the lie Amsterdam. It was a volcanic island where 28 inhabitants were ready to receive them.

To sum up, we are not afraid to die if we can all be together summary, we can say the collective power of unity and the never-failing confidence of the sailors made it possible for them to survive and come out from the jaws of death.