Summary of The Rattrap

The Rattrap summary is about a man who is a peddler. He has a pessimistic attitude towards the world. The peddler has not always been like this and was a fine man before. However, due to misfortune, he now resorts to selling rattraps, begging and even stealing to survive. Moreover, he also views the world as a big rat trap. He believes that much similar to the cheese we put for mice, the world offers us materialistic things to lure us. So, when we fall for these things, it traps us and takes everything away from us. In this story, a young generous woman takes in the rattrap seller. Thus, the generosity and kindness she shows changes his pessimistic take on life. This story teaches us about the essential human goodness we all must possess. 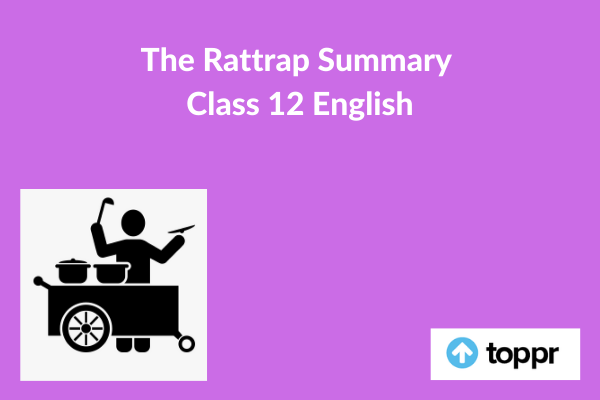 The Rattrap Summary in English

The story begins with a rattrap peddler who is in a rugged condition. He is dressed in rags and is very frail and looks starved. We learn he has no home and sometimes even begs and steals to survive in the world. He leads a lonely life with no one to care about him. One fine day, it strikes to him that this whole world is a rattrap itself. If we touch it, it will trap us and never let us go. He goes on to think that there are people out there who are already in this rattrap and reaching for the bait. On one cold evening, he reaches at a cottage to ask for shelter. An old crofter lived in that cottage who took in the peddler.

The crofter needed company so he welcomes the peddler. He gives him hot food and even tobacco to smoke. They play cards and start talking. The peddler learns that the crofter got thirty kronor for selling his cow which he keeps in a pouch on the window frame. The peddler leaves the next day but after seeing the crofter leave his cottage, he comes back to steal the pouch of money.

After stealing it, he takes the woods to remain unsuspected. In the wood, the peddler meets an ironmaster who mistakes him to be his old comrade. He invites him over for Christmas but he refuses. After that, the ironmaster’s daughter, Edla visits him and insists him to stay with them. In between, he feels sorry for stealing the crofter’s money. They help the peddler get a makeover and dress him in nice clothes and shave his beard off. After this, the ironmaster realizes he has made a mistake; the peddler was not his comrade.

Thus, the ironmaster thinks he is a fraud and decides to turn him in. However, Edla insists on letting him stay and celebrate Christmas with them. Her father agrees, and they celebrate Christmas together. Next day, the ironmaster and Edla learn that the peddler was a thief through the church about the incident at the old crofter’s. They head home in a hurry thinking he must have stolen all the silver. However, to their surprise, the peddler did not steal a thing. He left a note for Edla in the form a tiny rattrap. There was also a note thanking her for her kindness which saved him from the rattrap he got caught in. Most importantly, he also left the crofter’s money asking to return it to him.

Conclusion of The Rattrap

To sum up, The Rattrap summary, we learn that we can change the world through kindness and compassion; in addition, it teaches us that materialistic things never bring inner joy, only love and respect does.