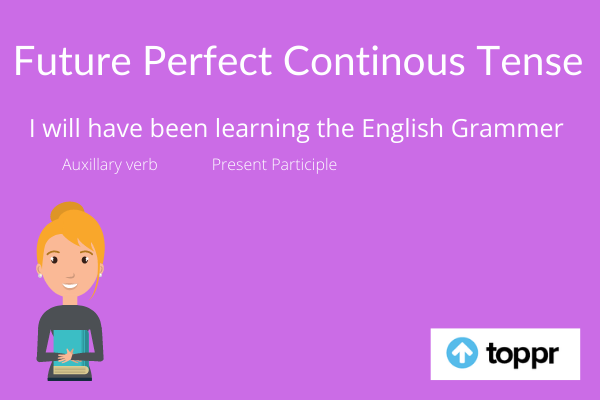 For example, learning, studying, mixing, laughing, etc. While framing the questions using the Future Perfect Continuous Tense, we indicate them by inverting the subject and will. For making negative sentences we use not between will and have.

Following are the situations where we use Future Perfect Continuous Tense along with sentences:

Sentence: She will have been teaching at the coaching classes for more than six months by the time she quits.

It means that she will quit the teaching job in the future and by that time she would have completed more than six months.

Sentence: Harry will be tired when he reaches the office as he will have been cycling for over an hour.

It means that harry is cycling to the office and thus he will be tired when he reaches there.

Duration before sometime in future

The following examples express that some past or present activity will continue until a particular time in the future for a duration.

Describing the cause of something in the future

The following examples express the cause and effect of an action in the future.

Active Voice: The famous interior designer will have been designing the house for over a year by the time it is completed.

Passive Voice: The house will have been designed by the famous interior designer for over a year by the time it is completed.

Fill in the blanks by choosing the correct word according to the rules of the Future Perfect Continuous Tense:

Answer. Option 4 – will have been

Question. 3. They ____ listening to the songs when I reach the office.

Answer. Option 2 – will have been

Question.4. I ____ writing articles when he comes home.

Answer. Option 3 – shall have been