Present Perfect Continuous Tense is a tense which is used to indicate an action that began in the past and has lasted or continued until the present moment. It uses the auxiliary verb i.e. has been or have been + present participle. Some examples of present perfect continuous tense are – I have been waiting here for three hours, He has been singing in the band for two years, Nancy has been teaching at the school since January. Thus, you use the present perfect continuous tense while describing any past event or condition which is continuing in the present moment. 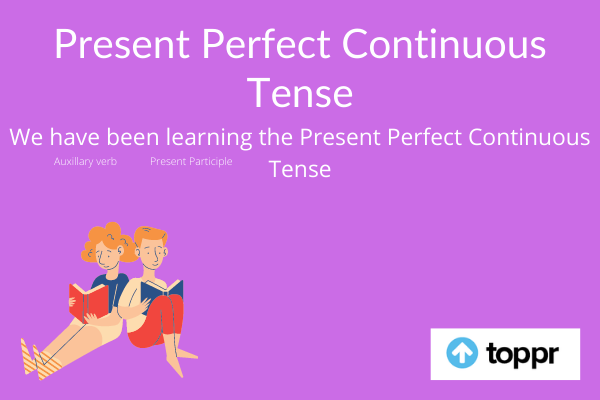 For example, reaching, missing, mixing, wiping, etc. However, all verbs are not compatible with continuous action such as to be, to own, etc. While framing the questions using the present perfect continuous tense, we indicate them by inverting the subject and has or have. For making negative sentences we use not.

Following are the situations where we use Present Perfect Continuous Tense along with sentences:

Sentence: He has been playing football at the club for two years.

It means that he started playing football for the club two years before and is still playing it.

Sentence: I have been falling ill more often, lately

It means that nowadays you are falling ill more.

Sentence: He has been living in Mumbai since 2008.

It means that we know a definite time from when he is living in Mumbai i.e. 2008.

Sentence: She has been waiting for the cab for one hour.

It means that we know the amount of time for which she waited for the cab i.e. one hour.

Duration of the action from the Past until present

The following examples express the actions that began in the past and are continuing in the present moment.

The following examples express the use of present perfect continuous tense, without any duration. When we do not use duration, in order to emphasize the meaning, we use ‘recently’ or ‘lately’.

The following examples express the time of action using the present perfect continuous tense. When we know the exact starting time of action and also intend to reflect it in the sentence, we use the word ‘Since’. However, when we intend to indicate the amount of time for which the action lasted or continued, we make the use of the word ‘For’.

Fill in the blanks by choosing the correct word according to the rules of the present perfect continuous tense:

Answer. Option 2 – Has been

Answer. Option 2 – have been

Answer. Option 3 – have been