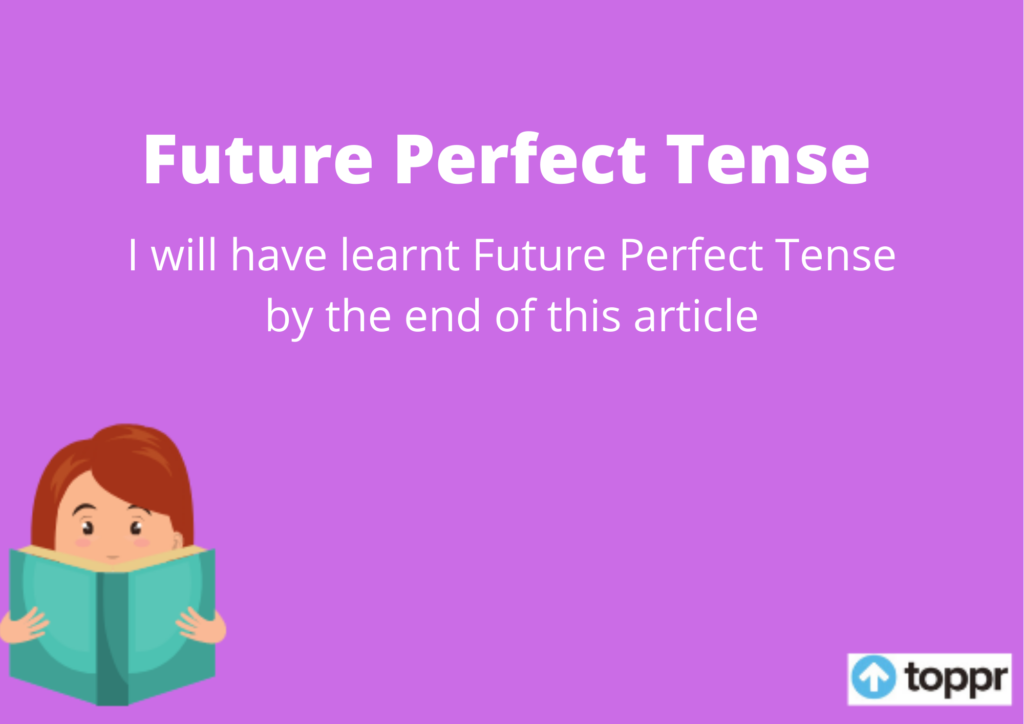 The future perfect tense refers to a verb tense which we use for actions that will be finished before some other point in the future. Moreover, it has two different forms which are ‘will have done’ and ‘be going to have done’.

They are not like simple future forms because future perfect forms are generally interchangeable. For instance:

The movie will have ended by the time Riya returns from college. At three o’clock I will have left.

Thus, you see how the future perfect tense is for when we talk about an action that will be completed between now and some point in the future. Let’s say that your aunt, Ruby, asks you to look after her dog for a few days while she goes abroad.

She asks you to come over today at noon so you can see where to find the dog food and how to give it in which quantity so that Tommy will get healthy amounts of food. However, as you’re not free this afternoon, you ask aunt Ruby if you can visit her at nine o’clock tonight instead.

“No, that won’t work! At nine o’clock I will have left already,” she says.

Thus, you see the future perfect tell us that Ruby is going to leave for abroad some time after right now, but before a particular point in the future (nine o’clock tonight). She probably shouldn’t have waited until the last minute to find a sitter for her dog.

The formula for The Future Perfect Tense

The formula for this tense is quite simple:

Will have + [past participle]

The subject of your sentence, whether singular or plural, does not matter. It is because the formula will not change.

You can also use the future perfect tense and the simple future tense interchangeably sometimes. When you take a look at the sentences below, you will realize there is not any real difference in meaning as the word before clears up the sequence of the events:

However, without prepositions like before or by the time that clears the sequence of events. One must use the future perfect for showing what occurred first.

Not Using the Future Perfect Tense

Incorrect- Ruby will have left.

The deadline may be very specific (six o’clock) or it can be vague (next month). It can also depend on when something else takes place (after the movie ends). It just has to be some time in the future.

It is very simple to make a negative future perfect construction! You just have to insert not between will and have.

They will not have eaten lunch before they get to the movies tomorrow afternoon.

They will not have finished reciting the poem before the play.

Moreover, we can also use the contraction won’t instead of will not. They won’t have finished reciting the poem before the play.

Uses of the Future Perfect Tense

In order to get a clear understanding, let us take a look at the uses of the future perfect tense.

Completed Action Before Something in the Future

Look at the examples carefully and you will see that the reference points (given in italics) are in simple present instead of simple future. It is because the interruptions are in time clauses, and one cannot make use of future tenses in time clauses.

Duration Before Something in the Future

Choose the correct word for the blanks-

Answer 1: Option b- Have graduated.

Answer 2: Option b- will not have.