Past Perfect Tense is a tense which is used to indicate the actions that took place before some point of time in the past. It uses the auxiliary verb i.e. had + past participle. The rule is the same whether the subject is Singular or Plural. Some examples of past perfect tense are – If I had reached the station on time, I would have not missed the train, I had never been to riverside before I went to Varanasi. Thus, you use the past perfect tense while describing any past event or condition before some point in time. 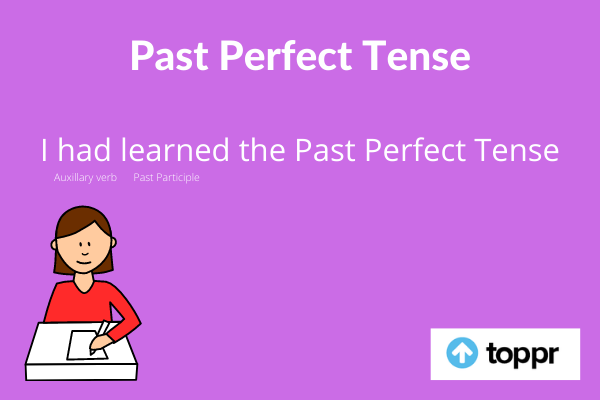 Definition of Past Perfect Tense

This tense uses had + past participle. In the forming of the past perfect tense, we use ‘had’ irrespective of the subject being Singular or Plural. The second element that is the past participle is formed by adding -ed or -d to the root of the verb.

For example, reached, missed, mixed, wiped, etc. However, you may use verbs with irregular past participles also such as woken, eaten, gone, done, won, etc.

Following are the situations where we use Past Perfect Tense along with sentences:

Sentence: Only after we had bought the tickets, we were able to enter the cinema hall.

Sentence: I had watched the movies for years without ever having to buy the tickets.

It means before you were allowed to watch movies without tickets but not now.

Sentence: If I had purchased movie tickets, we would have been able to watch the movie.

It means that you had not purchased the movie tickets and thus you were not able to watch the movie.

Sentence: The guard asked us if we had bought the movie tickets.

It means that you had to show the guard the tickets you bought.

Sentence: I wished I had purchased the movie tickets in advance.

It means that you did not purchase the movie tickets and were unable to watch the movie. Thus, you are dissatisfied with your past action.

Past completed actions before another begin:

The following examples express the actions that began in the past and were also completed in the past. Also, they were completed before the beginning of the second event in the past.

Events of duration before something in the past:

The following examples express the actions and events that started and ended in the past but also were for a period of time i.e. duration and have now ended.

The following examples express the speech that took place in the past. However, all these actions are now complete. They may have occurred once or over a period of time.

Show dissatisfaction with the past actions or events

The following examples express an event that did not actually happen in the past. Here, the speaker is showing dissatisfaction with his or her decision and is stating the action he or she wishes had taken place.

Solved Questions on Past Perfect Tense:

Fill in the blanks by choosing the correct word:

Question.1. The principal ______ asked the students to get their report cards signed.

Question.2. Hari had traveled in train _____ years without ever having to buy tickets.

Question. 3. I ____ never visited a haunted house until then.