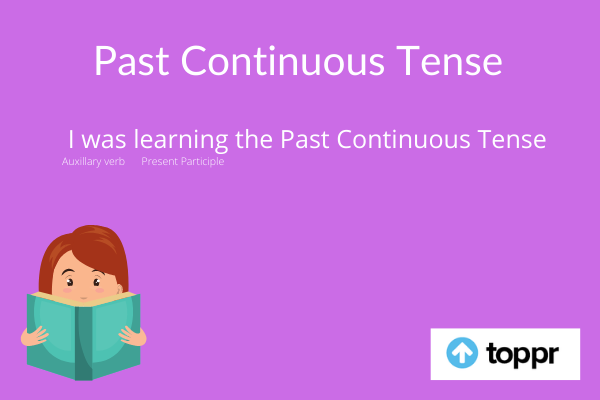 Definition of Past Continuous Tense

Past Continuous Tense is a tense which is used to indicate the actions or conditions that were happening at some point in time in the past but have now finished. In other words, past continuous tense is used to describe or indicate actions that began in the past and were continuing when another event occurred. It is important to note here that there may be two actions going on at the same time in the past, and one was interrupted by the happening of the other. Thus, both actions have occurred in the past. It is also known as the past progressive tense.

For example, learning, studying, mixing, laughing, etc. While framing the questions using the past continuous tense, we indicate them by inverting the subject and was or were. For making negative sentences we use not.

Following are the situations where we use Past Continuous Tense along with sentences:

Sentence: While she was cooking food, the microwave blew.

It means that she was cooking food in the past and the doorbell rang. So, the first event i.e. cooking got interrupted by the occurrence of the second event i.e. the blowing off of the microwave.

Sentence: Yesterday at 11 AM, I was having breakfast.

Sentence: He was listening to music while walking in the garden.

It means that listening to music and walking was going on simultaneously or at the same time.

Sentence: When I reached the shopping mall, several people were busy buying clothes, children were playing in the gaming zone, and some were busy enjoying delicious food.

It expresses the atmosphere inside the shopping mall sometime in the past.

Sentence: He was constantly talking and irritated me.

It means that his constant talking in the past had irritated me then.

For any interrupted action or condition in the past

The following examples express that a longer action was interrupted by a shorter action in the past.

Interruption at a specific time

The following examples express that a past action gets interrupted by a shorter action. Here, we can also mention that specific time.

The following examples express that in the past two actions were happening at the same time or simultaneously.

Use of ‘always’ and ‘constantly’

The following examples express the action that often happened in the past which was irritating or shocking.

Questions on Past Continuous Tense

Fill in the blanks by choosing the correct word according to the rules of the past continuous tense:

Question. 3. They ____ listening to the songs when I was reading.

Question.4. I ____ writing articles when he fell down.