The present perfect tense is a tense used in present to indicate the action that has taken place at some specific time. It uses auxiliary verb and past participle for the main verb i.e. verb + ed. Some examples of present perfect tense are – I have watched this movie before, He has completed his homework. You will mostly use the present perfect in daily conversation while talking about some changes or experiences. 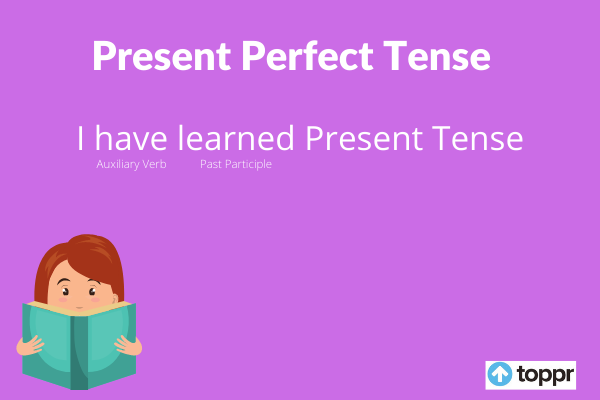 We use the present perfect to indicate a link between the present and the past. In other words, the time of the action is before now but not stated. In fact, most of the time, the result interests us more than the action itself. This tense forms by have/has + the past participle.

Thus, you will see that the construction of this verb tense is straightforward. Have or has is the first element which depends on the subject-verb is conjugated with. Similarly, the second element is the past participle of the very. It forms generally by adding –ed or –d to the root of the verb.

For instance, talked, leaned, wiped, mixed, and more. However, the English language does contain a few verbs that have irregular past participles. For instance, done, won, eaten, gone, thought, and more.

We use present perfect tense to describe:

An action or situation which began in the past and is continuing to the present. I have lived in Mumbai since 1995. It means you are still living in Mumbai.

An action performed during a period that has not finished yet. He has been to the zoo thrice this month. It means the month is not over yet.

A repeated action in an unspecified period between the past and present. They have visited London multiple times.

An action that was completed in the very recent past. ‘Just’ is used to express it. We have just completed our assignment.

An action when the time does not carry much importance. She has read ‘Harry Potter’. Here, the result of her reading carries importance.

Similarly, please remember that you wish to give or ask details about when, where, who, you must use the simple past.

Q. Has there ever been a wildfire in California?

A. Yes, there has been a wildfire in California.

Rules for using the Present Perfect

We understand that the concept of ‘unspecified time’ can be very confusing to English learners. Thus, it will help in associating present perfect with the following topics:

Q. Have you ever met her?

Present perfect is also used to denote the change that has occurred over a certain period of time.

The use of the present perfect is also done to list the achievements of people and humanity. But, you cannot mention a particular time.

Uncompleted Action You are Expecting

The present perfect tense is also used to talk about multiple different actions that have happened in the past at different times. It suggests the process is not complete and there is a possibility of more actions.

Choose the correct word for the blanks-

Question 1: ____ you completed your homework?