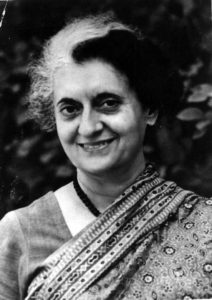 Shrimati Indira Gandhi was born on 19th November 1917 at Anand Bhawan in Uttar Pradesh. Indira Gandhi received education in different places because her parents were constantly moving. She received her primary education at Allahabad only. Besides this, she also studied various subjects at Oxford and Shanti Niketan. In 1942, she was married to a Parsi youth by the name of Feroz Gandhi. Her husband died in 1960 and both of them had two sons, Rajiv and Sanjay.

When she was prime minister of India, she led the country to greater heights. Under her leadership in 1971, India defeated Pakistan in the war and broke its back. Additionally, she also nationalized the banks in 1970 and abolished all the privy purses. These two bold steps defined her time as a prime minister of India.

One major decision of her tenure was yet to come when in 1975, opposition parties revolted against the historical judgment of justice Sinha. Thus, to neutralize the effect of the opposition of the country she declared the state of internal emergency. So, this resulted in a defeat for her in 1977. After this, for two and a half years she remained in hot water and it was in January 1980 that she came back to her position in the midterm poll.

After she returned to the office, she had to face many more challenges. The demand of ‘Khalistan’ was on the rise and it made her restless. This resulted in the attack on the golden temple. Thus, she ordered the army to rescue the Operation and free the temple from terrorists. On 31st October 1984, she was shot dead at her residence by two of her own security guards.

She was a woman of courage, vision, and foresight. Also, her 20 point program was a bold way in order to bring the prosperity of the poor. She was a woman who made history as a prime minister of India.