It is a misconception that all citizens of the country should know the preamble. Let’s put it in a better way! Further, everyone should know the gist of every preamble and every governing constitution of the world.  Before heading into everything essential about the Indian preamble, let’s learn a few basics about it!

For an organization or an institute to function properly, there are a set of rules and regulations. These rules and guidelines are the key essentials that help the head to govern its people.

Further, these rules could include dress code, culture to follow, hierarchy to abide by, etc. Similarly, for a country to function properly, there are a set of such rules.

Therefore, the preamble of the Indian Constitution is a brief statement of the various guidelines and rules that guide the citizens. Moreover, the preamble explains the aspirations and hopes of the people. It is a preface which emphasizes on the entire constitution.

The Constituent Assembly adopts this on 26th November 1949. However, it came into effect on 26th January 1950.

The Preamble and its Initial Articles

The Indian constitution and its preamble describe India as a sovereign, socialist, secular, democratic and republic.

Sovereign refers to the independent authority of a State. It also means that it has the power to legislate on any subject and that the preamble is not subject to the control of any other State or external power.

Socialist refers to the achievement of socialist goals through democratic, evolutionary and non-violent means.

Democratic refers to the right of the people of India to elect their governments by a system of universal adult franchise, which is also known as “one person one vote”. Every Indian citizen after 18 years of age who is not otherwise debarred by law is entitled to vote. The word ‘democratic’ not only refers to political but also to social and economic democracy.

Republic refers to the aspect wherein the head of state is in power and not a hereditary monarch. Thus, this word denotes a government where no one holds public power as a proprietary right.

It secures to all of its citizen with the following:

The Articles to the Preamble 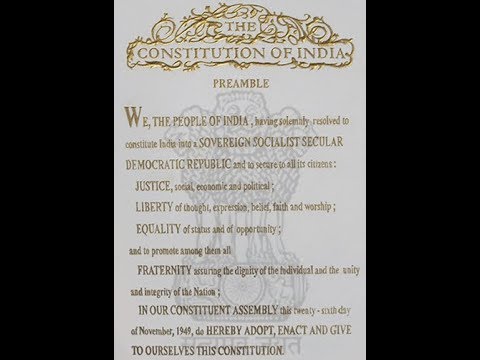 Part 1 – THE UNION AND ITS TERRITORY

Article 2 speaks of the admission of other territories into the union territories. These admissions are governed by law and only the parliament can do it.

Article 3 talks about the formation of new states, the alteration of areas and boundaries by either increasing or diminishing them.

Article 4 talks of territory reorganization for the nation’s benefit and citizen convenience.

Article 5 (Act of 1955) – citizenship decision is on the basis of 5 modes. However, they are: by birth, by descent, by registration, by naturalization and by incorporation of territory.

To know more about the Indian Constitution, click here.

Q. Who said that the Indian Preamble is the soul of our Indian Constitution?