“Poverty is the worst form of violence”. – Mahatma Gandhi.

We can define poverty as the condition where the basic needs of a family, like food, shelter, clothing, and education are not fulfilled. It can lead to other problems like poor literacy, unemployment, malnutrition, etc. A poor person is not able to get education due to lack of money and therefore remains unemployed. An unemployed person is not able to buy enough & nutritious food for his family and their health decline. A weak person lacks the energy required for the job. A  jobless person remains poor only. Thus we can say that poverty is the root cause of other problems. 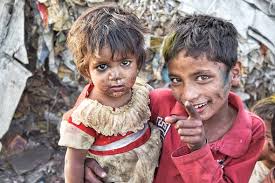 How Poverty is Measured?

According to the Noble prize winner South African leader, Nelson Mandela – “Poverty is not natural, it is manmade”. The above statement is true as the causes of poverty are generally man-made. There are various causes of poverty but the most important is population. Rising population is putting the burden on the resources & budget of countries. Governments are finding difficult to provide food, shelter & employment to the rising population.

The other causes are- lack of education, war, natural disaster, lack of employment, lack of infrastructure, political instability, etc. For instance- lack of employment opportunities makes a person jobless & he is not able to earn enough to fulfill the basic necessities of his family & becomes poor. Lack of education compels a person for less paying jobs & it makes him poorer. Lack of infrastructure means there are no industries, banks, etc. in a country resulting in lack of employment opportunities. Natural disasters like flood, earthquake also contribute to poverty.

In some countries, especially African countries like Somalia, a long period of civil war has made poverty widespread. This is because all the resources & money is being spent in war instead of public welfare. Countries like India, Pakistan, Bangladesh, etc. are prone to natural disasters like cyclone, etc. These disasters occur every year causing poverty to rise.

Poverty affects the life of a poor family. A poor person is not able to take proper food & nutrition &his capacity to work reduces. Reduced capacity to work further reduces his income, making him poorer. Children from poor family never get proper schooling & proper nutrition. They have to work to support their family & this destroys their childhood. Some of them may also involve in crimes like theft, murder, robbery, etc. A poor person remains uneducated & is forced to live under unhygienic conditions in slums. There are no proper sanitation & drinking water facility in slums & he falls ill often &  his health deteriorates. A poor person generally dies an early death. So, all social evils are related to poverty.

The government of India also took several measures to eradicate poverty from India. Some of them are – creating employment opportunities, controlling population, etc. In India, about 60% of the population is still dependent on agriculture for its livelihood. Government has taken certain measures to promote agriculture in India. The government constructed certain dams & canals in our country to provide easy availability of water for irrigation. Government has also taken steps for the cheap availability of seeds & farming equipment to promote agriculture. Government is also promoting farming of cash crops like cotton, instead of food crops. In cities, the government is promoting industrialization to create more jobs. Government has also opened  ‘Ration shops’. Other measures include providing free & compulsory education for children up to 14 years of age, scholarship to deserving students from a poor background, providing subsidized houses to poor people, etc.

Poverty is a social evil, we can also contribute to control it. For example- we can simply donate old clothes to poor people, we can also sponsor the education of a poor child or we can utilize our free time by teaching poor students. Remember before wasting food, somebody is still sleeping hungry.