We know that India is a developing country belonging to the Lower Middle-Income group. In this article, we will outline the basic characteristics of India as a developing economy. This will help us gain a better perspective of the Indian Economic conditions.

Basic Characteristics of India as a Developing Economy

In order to understand the Indian Economic landscape, it is important to make note of some of the basic characteristics of India as a developing economy. These are as follows:

Therefore, we can conclude that the per capita income of an Indian resident is lower than most countries in the world. 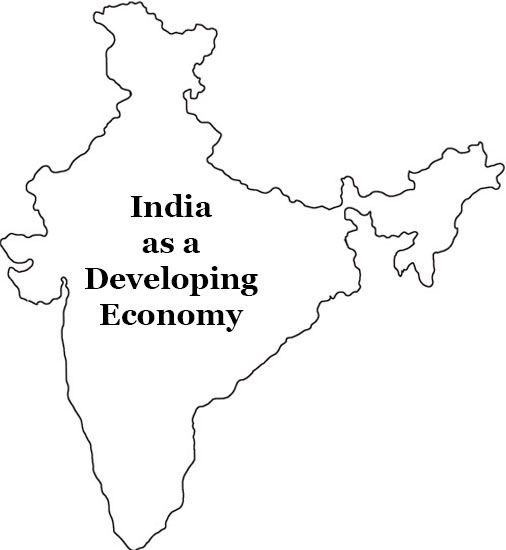 One of the fundamental characteristics of India as a developing economy is that it is majorly primary producing. What this means is that a majority of the population is engaged in agriculture (around 52 percent).

However, in 2011-12, the contribution of agriculture to the national income was only 13.9 percent. This disparity is slowing India’s progress.

The reason behind this difference is that agriculture is a low income earning sector. Also, productivity per person engaged in agriculture is very low.

Learn more about Infrastructure and Economic Development in India here in detail.

It is 1.36 billion – the population of India as on January 17, 2019, 21:30 hours. We are the second most populated country in the world and our population is equivalent to around 17.74% of the total world population.

In India, the high levels of illiteracy lead to a high level of birth rates. Further, improvement in medical facilities has increased the average life of an Indian citizen and led to a decline in the death rates too.

Chronic Unemployment and Under-Employment in India

Due to the deficiency of capital in India, it is difficult to engage the entire population in gainful employment.

Therefore, a cheap labor force is available in abundance. As a result, there is chronic unemployment and under-employment in our country.

Steady Improvement in the Rate of Capital Formation

In 2017, the population growth rate in India was 1.13%. Therefore, the economy needed a high amount of investment to offset the additional burden imposed by the rising population.

This balance is critical to maintaining the costs of living. Otherwise, there is a risk that we could achieve growth only at the expense of unacceptable inflation.

This inequality also highlights the fact that the resource base of 50 percent of households in India is weak.

It is so weak that it can barely provide them with anything above the subsistence level of income.

It is a simple equation. Underdeveloped countries have millions of illiterate citizens. Also, illiteracy retards growth since an individual needs a minimum level of education to acquire skills and/or understand social issues.

India is a country of eclectic mixes. One one side, a company uses one of the most modern technologies while another company from the same industry uses the most primitive one.

Unfortunately, according to modern scientific standards, the majority of products are made with the help of inferior technologies.

Low Level of Living of an Average Indian

In India, most citizens have a low-calorie intake and also consume low levels of protein thereby failing to secure a balanced diet. One contributing factor is the domination of cereals in our diet.

Currently, Indians consume nearly half the amount of protein that a citizen of a developed country does. The result, lesser immunity against diseases and lower efficiency at work. Additionally, the housing scenario is bleak as well.

Demographically speaking, India has a high density of population with high infant mortality rates and comparatively lower life expectancy as compared to the developed countries. This makes it an underdeveloped economy.

In fact, even China has a population density of 143 per square kilometer. Therefore, there is a lot of burden on land and other natural resources in India.

Also, India has a huge problem of harnessing the working age population in emerging areas of the economy.

Q1. What are the basic characteristics of India as a developing economy?

Answer: The basic characteristics of India as a developing economy are: