A financial system is an important tool for a country that wants to develop economically. The reason is that it helps in the creation of wealth by a way of investments. That is why there are different types of financial services available to facilitate the requirement. One of the important ways for a country to control financial transactions and services is through banks. Banking in India has been a backbone to so many businesses in the past as well as in the present times. It started in the 18th century and is still going strong. Different types of banks are central banks, commercial banks, investment banks, cooperative banks, postal banks. Let us see the introduction of Banks.

History of the Banking System and Types of Banks 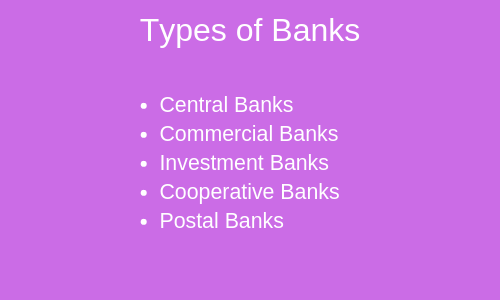 The major impact in the banking section was noticed during the time of ‘Swadeshi’ movement. Many banks were established during this time from 1906 to 1911.

Banks like Bank of Baroda, Corporation Bank, Bank of India, Canara Bank, etc were formed during this time period. During that time many strong political leaders and business tycoons funded the banks.

In the initial years the three presidency banks, Bank of Bombay, Bank of Bengal, and Bank of Madras, came together and amalgamated to form on a bank called Imperial bank of India. Till 1955, the bank was private.

Let us discuss them one by one.

Central banks are the top banking institutions for any country in the world. In India, it is reserve bank of India. They are responsible for many things like managing the currency, money supply in the system, foreign exchange, etc for that country. These central banks are by and large owned by the government.

Learn more about Reserve Bank of India here in detail.

Investment banks are the banks whose business is to underwrite the stocks and various bond issues. Anything related to the trade of these two is done by investment banks.

The banks which are owned by the depositors are called cooperative banks. These banks are generally coming under non-profit entities. Generally, the banks in India are divided like scheduled banks, non-scheduled banks, and central banks. Scheduled banks are those banks that are listed under the second schedule of the RBI act came in 1934.

There are certain conditions that these banks have to follow in order to stay in this category. Like these banks should follow the CRAR norms, and they need to pay upfront reserves and capital of 50 lakhs, etc.

Q. When was the Imperial Bank of India nationalized?

Q. In which year was Oudh commercial bank founded?