The population density of India is increasing at an alarming rate. With the increase in the population density, there comes an inevitable need to create smaller administrative units. This is necessary for better development. However, the units can be created only after a proper consent of the citizens of the respective states. 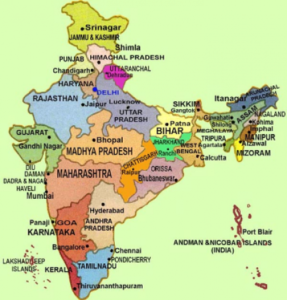 The first States Re-organising Committee (SRC) sub-divided India into 14 states and 6 union territories. It has been seen that smaller states such as Goa, Punjab and Haryana have a recorded faster and higher economic growth. This is because the smaller states are easy to administer and manage.

This is the reason why several larger states might be divided into smaller ones but after a proper consent of the respective states. The re-organization will definitely not be done in the manner that Andhra Pradesh has been divided recently. As a result of the re-organisation of Andhra Pradesh, there was a widespread public chaos and animosity.

Re-organization must always be followed by the efforts to ensure that the inter-state trade and commerce does not suffer. These must be free movement of goods between states. For this, the government has to abolish the Central Sales Tax. Further, the uniformity of rates of Value Added Tax across all states must be brought in practice.

Some Re-organisations in the Past

The capital of India, Delhi has grown massively both in population and size. There is a chance of its expansion. This can happen by the inclusion of parts of the adjoining districts, namely Alwar, Gurgaon, Rewari, Sonipat, Faridabad, Ghaziabad, Mathura and Gautama Buddha Nagar. The joint state may be called Indraprastha with Delhi as its capital city.

The police of the Indraprastha can be under the state govt excluding an area of 4 Km radius around Parliament House to be policed by the Central Government with the Central Reserve Police Force. As a result of the acceptance of this model, the concept and provision of the national capital region (NCR) will automatically become redundant.

In the last two decades, Chandigarh has witnessed a massive expansion. It can, therefore, be considered for the statehood with the inclusion of Mohali and Panchkula. Most of all, this must be done after taking public opinion. Despite that, it can continue to be the capital of Punjab and Haryana.

Probably, it might be better if Punjab shifts its capital to Jalandhar (centre of Punjab state). Furthermore, Haryana shifts it’s capital to Karnal or Jind. If not, both the states can start building new capital cities right in the centre of the states on the lines of Naya Raipur being built as the new capital of Chhattisgarh.

The capital cities of the big states, without giving up on their status, might come under the direct administration of central government. This will be helpful in speedy development, beautification and better administration. To bring in this change, a debate on this issue in parliament followed by formal referendum must take place. In case people favour the change, the same must happen.

Moreover, there is no justification or requirement of tiny union territories such as Dadar and Nagar Haveli, Daman and Diu. The formed must be merged with Maharashtra and latter with Gujarat.
Yangon, a small piece of land based in Andhra Pradesh that is under the jurisdiction of the distant Puducherry should be merged with Seemandhra. Finally, an appropriate name of the union territories should be central govt managed Areas (CGMA).

The Part-II of the Constitution from Article 5 to 11 deals with citizenship. In a state of the country, the population is divided into Citizens, Aliens and Stateless Persons. Let’s understand these terms one by one.

Citizens are the full members of the State. They owe an allegiance to it. Every citizen enjoys full civil and political rights.

Aliens are the citizens of some other states. They are not entitled to all constitutional and other rights. Aliens can be further classified into two categories.

Friendly Aliens have the right to life and personal liberty. They, however, do not enjoy the freedoms enumerated in Art 19.

Enemy Aliens are the people whose country is at war with India. It also includes the Indian Citizens who voluntarily reside in or trade with such a State. These people suffer special disabilities. They are not even entitled to the benefits of Art 22.

Rights and Advantages of Citizens

Let’s take a look at some of the right and advantages that are enjoyed by the citizens but denied to the aliens.

Stateless Persons are not the citizens of any country. Their citizenship is not recognised by any state. They get only those rights which aliens get. It is a small category and might not exist in some countries. For example, in Sri Lanka a number of Tamilians are treated as stateless persons.

Single Citizenship and no separate citizenship for states, thereby, at the commencement of the Constitution every person domiciled in the territory of India, born in the territory of India, or who has been a resident of India for not less than 5 years immediately preceding the commencement of the Constitution (26th Jan 1950) is a citizen of India.

Those behind the framework of the Indian Constitution did not lay down a comprehensive law with regards to the citizenship in India. The framers have simply described the classes of persons who would be deemed to be the citizens of India at the commencement of the Constitution on 26th January 1950 (Article 5) and left the entire issues to be dealt by law(s) made by the Parliament.

The Citizenship Act of 1955 provides for the acquisition of Indian Citizenship after the commencement of the Constitution in five ways. Therefore, if a person falls under any of the below-listed categories, he or she will be the Indian citizen.

Question: Part-1 of the Constitution deals with the union and its territories from Article-1 to 4, Article 1 (1) describes that; “India that is Bharat shall be the Union of States”. Why Union and not Federation?

Solution: This was deliberately done by the drafting committee to make it clear that the Union is not the result of an agreement with the states rather it is the union which create the states. The states have no right to secede under the constitution. Though the union is indestructible the states are destructible in the sense that Parliament can change their name, boundary or create new states.

Question: Explain citizen of India by birth and descent.

Firstly, a person is a citizen of India by descent if he is born outside India on or after Jan 26, 1950, but either of his parents is a citizen of India at the time of that person’s birth, i.e. the law of blood. Further, a person born outside India on or after 3rd December, 2004 shall not be an Indian citizen unless the parents declare that the minor does not hold passport of another country and his birth is registered at an Indian consulate within one year of the date of birth or with the permission of the Central Government, after the expiry of the said period.

Lastly, the children of those who are citizens of India by descent, as also children of non-citizens who are in service under a government in India, may also take advantage of this provision and become Indian citizens by descent, if they so desire, through registration.