The problem of citizenship was as follows: 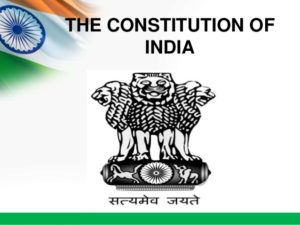 Article Five: Citizenship During the Commencement of the Constitution

Article Six: Rights of Citizenship of Certain Persons who have Migrated to India Territory from Territory of Pakistan

The sixth citizenship article of the Indian constitution provides citizenship rights to migrants from Pakistan to India.

Regardless of anything in article 5, a person who has migrated to the territory of India from the territory currently enclosed in Pakistan shall be deemed to be an Indian citizen at the commencement of this Constitution if –

Article Seven: Rights of Citizenship of Certain Migrants to Pakistan

Regardless of anything in citizenship article 5 & 6, a person who has after the 1st day of March 1947, migrated from the Indian territory now encompassing in Pakistan shall not be deemed to be a citizen of India:

Given that nothing in this article shall apply to a person who after having migrated to the territory now included in Pakistan has returned to the Indian territory under a permit for resettlement or returning permanently issued by the authority of any law and every such person shall for the purposes of clause (b) of article 6 be deemed to have migrated to the territory of India after the 19th day of July 1948.

Learn more about The Constitution of India here in detail

The eighth article reads that any person who or either of whose parents or grandparents were born in India as stated in the Government of India Act 1955 and who is residing ordinarily in any country outside India shall be considered to be a citizen of India.

Article Nine: Persons Voluntarily Acquiring Citizenship of a Foreign State Not to be Citizens

According to article 9, the Constitution of India does NOT allow dual citizenship, i.e., holding Indian citizenship and citizenship of a foreign country simultaneously.

Article Ten: Continuance of the Rights of Citizenship

The Article 10 states that every person who is or is deemed to be a citizen of India in any of the preceding provisions of this Part shall, subject to the provisions of any law that may be made by Parliament, still be a citizen.

Article Eleven: Parliament to Regulate the Right of Citizenship by Law

Given the already declared provisions in this part, there is nothing else that can take away the power of Parliament to make any provision with respect to the acquisition and termination of citizenship and any other matter regarding the same.

Q. Details on how citizenship may be acquired and terminated are enumerated in:

Ans: The correct option is b.