The soil is one of the most important natural resources that nature has provided to humankind. It actually sustains life on the planet as it is an essential ingredient for growing plants. But have you noticed that not all soils look the same? This is because the soil has a large range of variety. In fact, there are thousands upon thousands of soil types in the world.

There are a variety of reasons for these variations in soil. Primarily soils are different from region to region due to the climatic conditions (like temperature, rainfall etc). The variety of flora and fauna of a region also has an influence on the soil profile. And there can even be a human influence.

One of the main regions to study the various types of soil in India is to understand how it affects the biodiversity of a region. let us take a look at some of the major types of soil we find in India.

These soils are rich in minerals especially potash. They are a dark shade of grey and are extremely suitable for agriculture. Some dark black alluvial soil can also be found in coastal areas.

Black Soil are characterized by their deep black colour. Their composition has a large amount of clay. This helps the black soil retain water, making them ideal for crops that require water year round. This also gives them a unique self-ploughing ability.

These soil are rich in lime, iron and magnesia. They are mainly found in the Deccan Plateau in Maharashtra, Madhya Pradesh, Gujarat etc. They are also known as Black Cotton Soil, since cotton grows exclusively in black soil, and is one of the main cash crops in India.

These distinct soils are named after their hues. Red soil gets its colour from the iron found in its composition in a crystallized form. The soil takes on a yellow colour when it is hydrated. These soils are generally found in the Western Ghats, Odisha and Chattisgarh.

The clay form of red soil is nutrient rich and viable for forestation. However coarse red or yellow soil has been completely leached of all its nutrients and is not fertile. Red soil actually has a very low level of humus and require fertilizers when used for farming.

Such soils are found in regions of high temperature and very high rainfall. The rains will wash all the nutrients from the soil, leaving it infertile. The leaching process will leave behind iron-rich soil, absent of silicon. The humus composition is also affected by bacteria and fungi that thrive in high temperatures.

Such soils are found in the hot and humid regions of Western Ghats, Eastern Ghats, Malwa Plateau, Tamil Nadu, Kerala etc. While these soils are not entirely suitable for agriculture they have other uses. they are used to make bricks which we use in constructions.

These are the sandy soils that appear in extremely dry and arid regions of Rajasthan and Gujarat. These soils are completely void of any organic matter. They also have a very high saline content, making them largely infertile. Only desert vegetation (cacti, bushes etc) can grow in this type of soil.

These are also known as Usara soils. As the name suggests they have a very high saline content in their composition. They also have large quantities of potassium and magnesium, making them infertile. These soils are found both in dry regions and in swamps.

A problem that farmers are facing, is that due to excessive irrigation and fertilization that leads to leaching fertile soils are now becoming saline. The nutrients of Alluvial Soils are being washed away, and fertilizers and chemicals are making the soil high in salinity and infertile for agriculture.

These are soils that have a very high content of organic matter and humus. They are seen in regions with high rainfall and average temperatures. If there is a lot of vegetation around the dead organic matter will accumulate, and in turn, enrich the soil with humus.

These soils also have a black colour and are loamy in texture. There are usually found in parts of Bihar, Uttranchal, Bengal and Tamil Nadu. And while they are suitable for agriculture, these soils need proper care so they do not leach away all their nutrients in the heavy rainfall.

Soils of the World

Soils are basically the essence of life on the earth. Which is why they matter the most when they are near human population. In fact, the kind of soil found in an are may define the population structure of the place. In ancient times the world population would depend on the soil structure of the world.

One way to keep track of the different types of soils found in the world is via soil mapping. These maps show the distribution of the different varieties of soil that can be found in a particular area. This helps the farmers with their agriculture, helps the government keep a check on soil pollution, helps environmental conversationalists, etc. 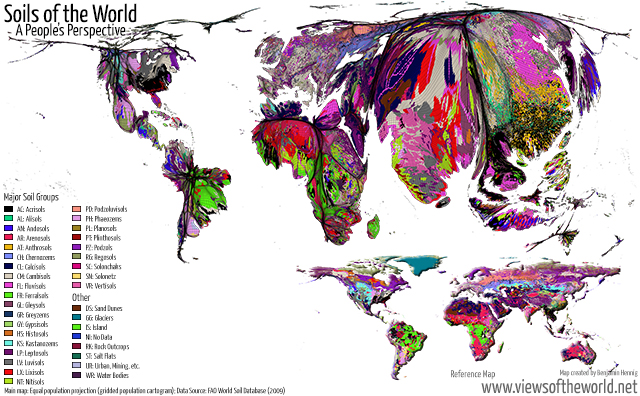 Question: Alluvial soils are very important for Agriculture. Explain why.

Solution: Alluvial sand has a perfect composition of silt, clay, sand and humus. They have all the necessary nutrients as well (like nitrogen, potassium etc). This combination allows the soil to retain moisture and also allow air to penetrate, and water to drain well. This makes it an ideal soil for agricultural purposes.