You have made sand castles on the beach, haven’t you? But, did it ever occur to you what sand is and how is it so abundant? Well, let us tell you all about carbon compounds and silicon compounds. Sand belongs to the latter category. In this chapter, we will look at these compounds in brief and learn about some important silicon uses.

You know about the element silicon. Let us now look at its compounds. There are two main compounds, Silica and Silicates. These are the most plentifully available compounds on the earth’s crust(around 95%). Let’s take a look at some of the silicon compounds.

Silica is nothing but Silicon dioxide(SiO2). We usually find it in crystalline forms like quartz, cristobalite, tridymite. These forms are interconvertible when we apply the correct temperature or pressure.

The structure of SiO2 is very large. It has a very high bond enthalpy. Therefore, it is unreactive to many acids, halogens as well as alkalies. However, you must remember that it easily dissolves in HF and NaOH. Silica gel is a drying agent. We use it to support chromatographic materials and other catalysts.

This refers to a group of organosilicon polymers with repeating units. Alkyl or Aryl substituted silicones are the basic products in the manufacture of silicones. Silicones have high thermal stability and are resistant to oxidation and other chemicals. We use this compound as an electrical insulator. It finds wide use in surgeries as well.

The structure of silicate is SiO44- in which we have four oxygen atoms attached to one silicon atom. The two most known man-made silicates include glass and cement.

Zeolites find their use in the petrochemical industries as a catalyst. We can convert alcohols directly into gasoline by using a zeolite called ZSM-5. We can also use these zeolites to soften hard water. 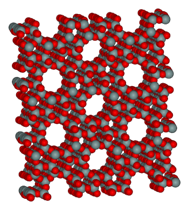 That is all about the compounds of silicon. Now, let us move to the other part of the story, the carbon compounds.

Well, when it comes to carbon, we know quite a bit about its compounds already. Yes, carbon dioxide and carbon monoxide are some important carbon compounds We know their formation and structure and also, their use. Therefore, in this section, let us look at some complex carbon compounds. We can term them as organic compounds as well.

Ethanol goes by the general name ethyl alcohol. We commonly know it as alcohol or spirit. It mostly constitutes the alcoholic drinks. This organic compound finds its use in the manufacturing of medicines, such as tincture iodine, cough syrup, etc. However, one must never consume pure ethanol as it could prove to be fatal.

Acetic acid is the general name of ethanoic acid. It has a melting point of 290 K. This compound freezes in winter and hence, we term it as glacial acetic acid. The vinegar that we consume is a 5% to 8% solution of acetic acid in water. It is also used to preserve pickles.

Now, we will look at a very interesting concept. Do you know what your soaps are made of? Well, organic chemistry has an important role to play in this!

What are Soaps and Detergents?

Soap has the inability to form a lather in hard water. To overcome this problem, chemists introduced detergents. These are soapless soaps. Detergent is the sodium salt of benzene sulphonic acid or sodium salt of long chain alkyl hydrogen sulphate.

When we dissolve a soap in water and put the clothes in the soapy solution, soap molecules converge in a typical fashion to make a structure. This structure is a micelle. The hydrophobic ends of different molecules surround a particle of grease and make the micelle. It has a spherical shape.

In this, the hydrophilic end is outside the sphere and hydrophobic end is towards the centre of the sphere. That is how soap molecules wash away dirt and grease by making micelles around them.

Q: Why does soap lose its cleansing property in hard water?

Share with friends
Previous
Introduction to p-Block Elements
Next
Dioxygen