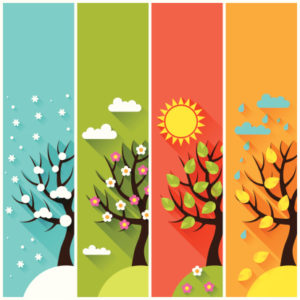 When we discuss the climate of India, we also focus on the seasons in India which are,

Winter season is the season of cold. It extends from December to February. During the winter season, you wear warm clothes because the sunrays do not fall directly in the region hence the temperature drops down. As a result, there is cold, especially in northern India.

Summer season is the season of heat. The summer season extends from March to May. During the summer season, the surface of the Earth become dehydrated because the sun rays directly fall in the region hence increasing the heat. Temperature becomes very high. Hot and dry winds called loo, blow during the day.

Monsoon is the season of rains. It extends from June to September. It is marked by the onset and advance of monsoon. The winds blow from Arabian Sea and Bay of Bengal towards the land and carry moisture with them. When these winds strike the mountain barriers, rainfall occurs.

Autumn is the season of retreating monsoon. It extends from October to November. Winds move back from the mainland to the Bay of Bengal. The southern parts of India, particularly Tamil Nadu and Andhra Pradesh receive rainfall in this season.

The climate of India is rainfall dominant as there are almost 4-5 months of rainy season. It is described as Monsoon Type. India is blessed with its location in the tropical region, therefore most of the rain is brought by the monsoon winds. The concept of ‘climate’ would be clear if we understood the factors affecting the climate of India:

The plants which grow on their own without help or interference from human beings are known as Natural Vegetation. Needless to say, water is life and hence many types of different vegetation of Inida is dependant upon the climate of India especially Monsoons. Vegetation of India is divided into five major types:

As their name suggests, rainforests are usually near the equatorial belt. These forests are so dense that even the sunlight doesn’t reach the ground. The species of trees here shed their leaves during different times of the year. Therefore they will always appear green.

Important trees: Mahogany, Ebony and Rosewood. Places where they occur: Andaman & Nicobar islands, parts of north-eastern states and a narrow strip of the western slope of the western ghats. Deciduous forests are also known as monsoon forests in India. They are comparatively less dense than evergreen forests. All the trees in this forests shed their leaves during the same time of the year (i.e Autumn).

Important trees: sal, teak, peepal, neem and shisham. Places where they occur: MP, UP, Bihar, Jharkhand, Chattisgarh, Odisha and in parts of Maharashtra.

As the name suggests, thorny bushes are found in the dry regions of India. Thorny bushes have left in the form of spines to save water.

A wide range of species is found in the mountains varying to their height. At a height between 1500 metres and 2500 metres, most of the trees are conical in shape. These trees are called coniferous trees. 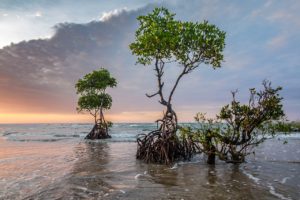 Mangroves are found in saline water they can survive in saltwater.

Important trees: Sundari. Places where they occur: They are found mainly in Sunderbans in West Bengal and in the Andaman & Nicobar Islands.

India is home to various wildlife species, they are an inhabitant in specific regions of India. Let us uncover these regions and understand the Indian wildlife:

In order to conserve the wildlife and protect it, various sanctuaries and national parks have been established. Wildlife week is celebrated in the first week of October, to create awareness of conserving the habitats of animals.

Question: What are the important trees of Evergreen forest?