Ever since the ancient times, the clan and caste system in India has prevailed. But even these systems evolved with time. Once such unique evolvement was castes based on the occupation of people which came to be known as Jatis. Let us learn more about them.

India is known to be a diverse country and is among the vibrant country whose roots can be traced down back to thousands of years. Many people find it difficult to understand the prevalence of hierarchy in our society. Let us get some prior insight into class, caste, and hierarchy in India.

The hierarchical structure started right from the family unit where men are ranked higher than women irrespective of age. Not only this but the older generation people hold a higher position as compared to the younger members of the family.

The social grouping in India when talking of hierarchy in India focuses on Caste. According to the social standing and occupation, a ranking was given on the basis of groups and caste. On the original basis, there were four Castes, namely Brahmins or priests, Kshatriyas as rulers, Vaishyas as merchants or farmers, and Shudras as artisans or servants.

The Emergence of New Castes

With growing economy and the society needs people required new skills. Due to this, the emergence of smaller castes or “jatis” emerged within varnas. Just like the Brahmanas appeared amongst new caste. Apart from these new tribes and different social groups were put into society restricted on a caste-based system and were the given the stature of jatis.

Brahmanas put different jatis and recognized them under specialized artisans groups like carpenters, masons and smiths. However, rather than varnas – jatis became the major basis for organising the society. 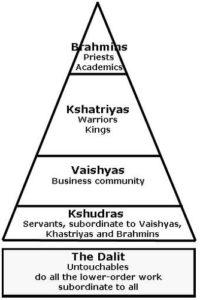 By the 11th and the 12th centuries, new Rajput clans among the Kshatriyas became powerful and continued to grow, belonging to different lineages. They came to be known as Hubas, Chandelas, Chalukyas and others-  of which some had been tribes earlier.

These clans were regarded as the Rajputs who were gradually replaced by the older rulers wherein the developed society started to emerge and the rulers continued to grow their wealth in order to create a powerful state.

The continued rise and growth of the Rajput clans on the same position of rulers set as an example for the tribal people to follow. With the support of the Brahmanas, other tribes also became part of the caste system leading them to join the ruling classes. However, a majority of them joined the lower jatis of caste society.

Not only this, but many tribes had also adopted the Isla – including the Punjab, Sind and North-West Frontier. Due to this many of them continued to reject the caste system and denied the acceptance of an unequal social order by the certain sect of the orthodox Hindus.

Question: What changes took place in the Varna-based society?

Ans: The following changes took place in the Varna based society: