Circles in maths refer to a closed 2D shape made up of points that are equidistant from a central point. A common circle we see in everyday life is the wheel, which is perhaps the most significant invention transferred to us from the Mesopotamian civilisation! Historically, there are references to circles and the theorems on circles dating back to 650 BC. the word circle is derived from the Greek word ‘’kirkos’ that means ‘ring’. Here, we delve into the basics of circles, right from their definition to how to draw circle, parts of circle, circle formulas, and properties of circles.

How to Draw Circle?

Area and Circumference of a Circle

Circles in maths refers to a set of points in a plane that are at the same distance from a particular point at the centre. Few real-world examples of circles include coins, dining plates, pizza, and others. The distance from the centre and the points is called radius. We’ve covered how to draw circle in the next section. In coming sections, we will cover circle formulas and properties of circles. 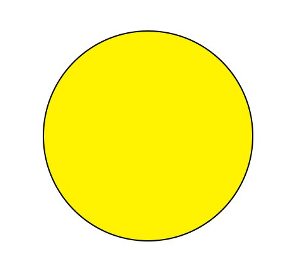 The line that divides a circle into half is called its diameter. If we fold a circle into half, the parts that make up either side of the circle will be exactly the same in terms of area and shape. So, the diameter is the line of symmetry and the circle is said to be a symmetrical figure. The line that divides a figure into equal symmetrical parts is called the line of symmetry. In a circle, we can draw an infinite number of lines of symmetry. This means, a circle can be divided into similar or to put it more accurately, ‘congruent’ parts.

Circle is an important shape in geometry. Out of all the geometric shapes and figures, circles in maths are a fascinating form present around us. Be it the sun, moon and even a bottle cap, circular objects are quite common. Other examples of circular objects include coins, wall clocks, wheels, dartboards, rings, cakes, bangles, buttons and many more. In the next section, we’ll learn how to draw circle. 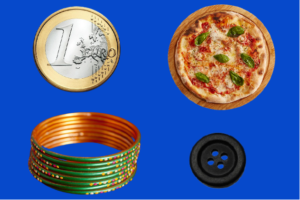 How to Draw Circle?

Drawing a perfect circle isn’t easy by hand. If you want to draw circles in maths, a compass (a geometric tool) is preferred. Here are the steps on how to draw circle:

Here’s a video to learn more about circles in maths: https://youtu.be/tEleNEkB6ds

Now that we’ve seen how to draw circle, let’s move on to parts of circle.

The diameter can be termed as a line which is drawn across a circle passing through the center.

The distance from the middle or center of a circle towards any point on it is a radius. Interestingly, when you place two radii back-to-back, the resultant would hold the same length as one diameter. Therefore, we can call one diameter twice as long as the concerned radius.

In circles in maths, the area can be stated as π times the square of the radius. It is written as: A = π r2. Taking into consideration the diameter: A = (π/4) × D2 In the previous section, we saw how to draw circle, the border of the circle is called circumference of a circle.

A line segment that joins two points present on a curve is called as the chord. In geometry , the usefulness of a chord (parts of circle) is focused on describing a line segment connecting two endpoints which rest on a circle.

A line that slightly touches the circle on its travel to a different direction is Tangent. On the other hand, a part of the circumference is an Arc.

A sector is a part of a circle surrounded by two radii of it together with their intercepted arc. The segment is that region that is enclosed by a chord together with the arc subtended by the chord.

In geometry, Quadrant and Semicircle are known as two special versions of a sector. Other parts of circle include         quadrant and semicircle.

A circle’s quarter is termed as Quadrant. Half a circle is known as a Semicircle.

So far, we have covered parts of circle. Let’s move on to formulae and equations associated with circles.

Area and Circumference of a Circle

Area of a circle

First, draw a circle. Refer to the previous section on how to draw circle. Next, divide the circle into 8 equal parts and then arrange them in a rectangular form. 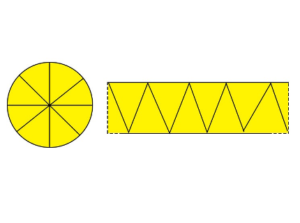 Area of a rectangle is = length × breadth

The breadth of the rectangle = radius of the circle (r)

Circumference of a circle is the length of the border of the circle. In section, how to draw circle, we’ve seen that the border of the circle that we drew is the circumference. It is also sometimes called ‘perimeter’ but the word perimeter is more apt for figures that are made of straight lines, like rectanges, squares and polygons. Circle formulas for the circumference of a circle is C = πd = 2πr, where π = 3.1415.

Learn more about parts of circle (circumference, tangent, and so on) and circle formulas.

We have seen circle formulas in the previous section. To derive the equation of circles in maths, let us draw a circle of radius ‘r’ (we have covered definition of radius in parts of circle section), and put it on the coordinate plane. We have seen how to draw circle in a previous section. Take the centre at O(h,k) and then a point A on the circumference and assume its coordinates to be (x,y) and join OA. Now, we will assume a point B inside the given circle such that OB is ⊥ to AB which gives us a right angled triangle AOB with right angle at B. This makes OA, hypotenuse.

From Pythagoras Theorem, we can say that

So, this equation is more like a collection of all such points on the circumference and is, hence, the equation of circles in maths. The centre of this circle is at (h, k) and if you move it to the origin then the equation will become x2+y2=r2

In the next section, we’ll cover the different properties of circles.

Learn more about circles in maths and parts of circle, including circle formulas.

Solved Examples for Circles in Maths

Question 1: Calculate the area of a circle having radius 1.2 m.

Answer: The area of a circle here can be calculated using the circle formulas, Area = πr2

Question 3: If two circles have their radii in the ratio of 3:2, then their areas are in the ration of?

Question 4: If the radius of a circle is 5 cm and the measure of the arc is 110˚, what is the lengthof the arc?

Question 5: If we have a circle of radius 20 cm with its centre at the origin, the circle can be described by the pair of equations?

Answer: We know that for parametric form of equation of circle, x=h+Rcosθ & y=k+Rsinθ

Question 1: How to find the area of a circle?

Answer: The formula for finding the area of circles in maths is πr2. Moreover, you can find the area of a circle by multiplying the value of pi that is 3.14 or 22/7 by the square of the radius. However, in place of radius. diameter of a circle is mentioned in the question then half it as the radius is half of the diameter.

Question 2: Is the circumference of a circle squared?

Question 3: Give a simple definition of circles in maths?

Answer: It refers to a round 2D shape in which all the points on the edge of the circle are at the same distance from the center. We have already covered how to draw circle in a previous section. Moreover, the diameter of a circle is equal to twice its radius. In addition, the circumference of a circle is the line that goes around the center of the circle. Parts of circle include diameter, radius, chord, tangent, etc.

Question 4: Define the radius of a circle?

Answer: It refers to the distance between the centers to any point on its circumference. The simplest way to find radius is to half the diameter.

Question 5: What are the properties of circles?

Answer: A full circle comprises of 2π radians (approximately 6.28). You will often come across this in circle formulas. Moreover, always remember that an arc of a circle is what defines a radian. Further, the length of the arc is equal to the radius of a circle.

Answer: First, let us make clear that a circle divides into 360 equal degrees. Thus, this means that a right angle is 90°. So, the angle of an equilateral triangle comprises 60 degrees. Then again, scientists, engineers, and mathematicians usually measure angles in radians.

Question 8: Is circle a polygon?

Answer: Polygon refers to a closed plane figure that has three or more sides that are all straight. Besides a circle is not a polygon because it does not have straight side, instead it has round sides.

We have covered various aspects of circles here, including how to draw circle, parts of circle, circle formulas and properties of circles.

Share with friends
Previous
Polygons and Angles
Next
Curves