Learning about geometric shapes is quite useful in case we are going to pave our future in fields such as engineering and architecture. What exactly is a polygon? Can a square be a polygon? You can call a polygon as the largest named group holding several geometric shapes. In this lesson, we would try to understand the importance and types of triangle and quadrilaterals which are an important part of this group.

A triangle is a simple closed curve or polygon which is created by three line-segments. In Euclidean geometry, any three points, specifically non-collinear, form a unique triangle and separately, a unique plane (known as two-dimensional Euclidean space). 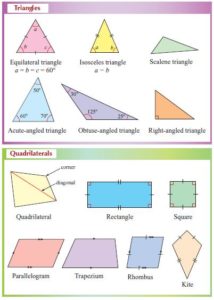 On the other hand, in terms of Euclidean plane geometry, a polygon having four edges (or sides) together with four vertices is called a quadrilateral. At times, the term quadrangle can be used and sometimes tetragon for uniformity with pentagon (5-sided) or hexagon (6-sided).

Primarily there are three types of triangle, namely:

Further, triangles can be segregated depending on the number of congruent sides. Therefore, you can count on two different ways to classify the types of triangle:

Hence, if every side holds a parallel opposite side, this shape is termed as a parallelogram. It is important to note that, rectangles, rhombuses (rhombi) and squares are all parallelograms since their opposite sides are parallel (always). Furthermore, a rhombus holds four sides of equal length.

Question 1: What is a triangle with one angle greater than 90° called?

Question 2. A triangle with three equal sides is called as?

Question 3: What are the 7 types of triangles?

Question 4: What are the properties of a triangle?

Question 5: What are the properties of a parallelogram?

Answer: Parallelogram has properties that the opposite sides are parallel and equal. Further, a parallelogram includes equal opposite angles and does not have symmetry lines. Finally, the rotational symmetry order is 2 in parallelograms.

Question 6: What is a quadrilateral?