In this lesson, we shall focus on the equation of a plane passing through three non collinear points. We shall look at both – the Vector form and the Cartesian form of equations. 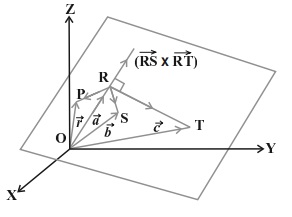 From the figure we can write,

Note that here \( \vec{b} \) and \( \vec{c}\) are the position vectors of the points S and T respectively. Thus, the above equation can be taken to represent the equation of a plane passing through three non collinear points in Vector form.

We shall now move on to the Cartesian equation.

Let P be a point on the plane that must contain these points. The position vector of the point P be \( \vec{r} \) and its coordinates are (x, y, z). Now, we can write the vectors as –

We can now use the Vector form to substitute the above vectors. Doing so would give us the advantage of presenting the equation in determinant form as under –

Thus the determinant form gives us nothing but the Cartesian equation of a plane passing through three non collinear points.

Answer:  We shall first check the determinant of the three points to check for collinearity of the points.

Since the value of the determinant is not zero, it implies that the points are non collinear. Now, we shall find the equation of the plane in Cartesian from as under –

On solving, we shall get :

Question 2: What is the difference between collinear and non-collinear points?

Answer: A different line consists of points T, O, and M, thus those three points will be collinear, however they will not be collinear to points A, B, and C. Moreover, when points are not collinear, we refer to them as non-collinear. So, for instance, points A, T, and O will be non-collinear since no line will be able to pass through the three of them together.

Question 3: What are the three non-collinear points?

Question 4: What will be the locus of three collinear points?

Answer: The locus of a point halfway from three non-collinear points A, B and C refers to the circumcentre of the triangle. Further, the locus of the points will be the point of intersection of the perpendicular bisectors of each of the two points

Question 5: What are coplanar points?

Answer: Coplanar points refer to the three or more points that are lying in the same plane. Remember that a plane is a flat surface that extends without end in all directions. Moreover, we generally show it in math textbooks as a 4-sided figure